Inside Oxford Spirits, a throng of students eager to stock up on alcohol wrapped around the liquor store and out the door. Viral videos on social media captured students laughing while clutching six-packs of Corona.

It was Tuesday, March 10, just hours after Miami University President Greg Crawford announced classes would move online for the next month due to the novel coronavirus.

Days later, classes moved to remote learning for the remainder of the semester and business dipped sharply for liquor stores and local establishments across Oxford.

But, in the last three weeks, upperclassmen have returned to their off-campus homes to pack up, spend the final weeks of the semester with their friends and drink. Many of the students who buy alcohol don’t wear masks or practice social distancing, frustrating the essential workers who serve them by burdening these employees with health concerns on top of their increased coronavirus-related responsibilities while receiving low wages.

The biology and journalism double major works at the local deli — opened by Brick Street Bar & Grill owners Will and Mark Weisman in 2018 — which now sells a limited menu of gourmet sandwiches, grocery supplies, beer/wine and, in an effort to cater to Oxford’s returning student population, Brick’s signature drink: a Trashcan (t0-go, with the purchase of at least one food item, 4 p.m. - 9 p.m. Monday-Saturday).

“Students are doing an especially terrible job at social distancing,” Gentry said. “I see parties on Snapchat stories and people need to do a lot better.”

On Saturdays, groups of students flock to order Trashcans at Fridge & Pantry, Gentry said. While employees are required to wear masks and gloves, most customers don’t.

Despite removing their chairs, constantly sanitizing surfaces and encouraging customers not to congregate in the deli, Gentry is worried.

“We do our best to get people out, but we get lines,” she said.

“There are a select number of people our age that take it seriously,” he said, “but usually on weekends, they come in swarms and just act like it’s a normal weekend.”

They might distance from other patrons, Margulis said, but they’re not separating from each other.

On Sycamore Street, there are sheets of paper posted outside of Johnny’s Deli urging customers to “cover your mouth and nose before entering.” One reads, “If you find it more convenient, I can assist you outside.”

There are fewer crowds inside this liquor store than Spirits or Fridge & Pantry.

“Only people that live around the east side of town come here,” Johnny’s employee and Oxford resident Reddi Rava said.

He believes Johnny’s doesn’t see nearly the same amount of customers as other liquor stores because it’s located on a quieter, more secluded street in town.

Rava, who has been working at Johnny’s for the past six months, isn’t as concerned as Margulis or Gentry about the number of students returning. He wants his customers to stay safe and maintain a proper social distance, but he’s grateful business has gradually picked back up as more students return to Oxford.

Employees like Rava, Margulis and Gentry are considered essential during the pandemic —  they are required to come into work despite the public health risks, but barely make more than Ohio’s $8.55 minimum wage.

Ohio servers make the fourth-lowest median hourly wage, $9.51, compared to servers in the rest of the country, according to May 2019 data from the U.S. Bureau of Labor Statistics, estimating occupational employment and wages.

In fact, food preparation and serving related occupations — including cashiers, waiters/waitresses, bartenders and fast food cooks — made up eight of the 15 least paid jobs in Ohio last year, according to a data analysis by The Miami Student.

Even though Margulis and Gentry are student employees, they both have to work. And a combination of low pay and health risks isn’t an easy undertaking.

“Life in Oxford seems normal here, but we can all work together to keep our community safer,” Gentry said.

Both are concerned by the number of Miami students who don’t consider the implications of not socially distancing or wearing a mask on those who serve them or the full-time Oxford residents.

“I wish people wore masks and were more considerate of others,” Gentry said. “I’m worried for our future if this behavior keeps up.” 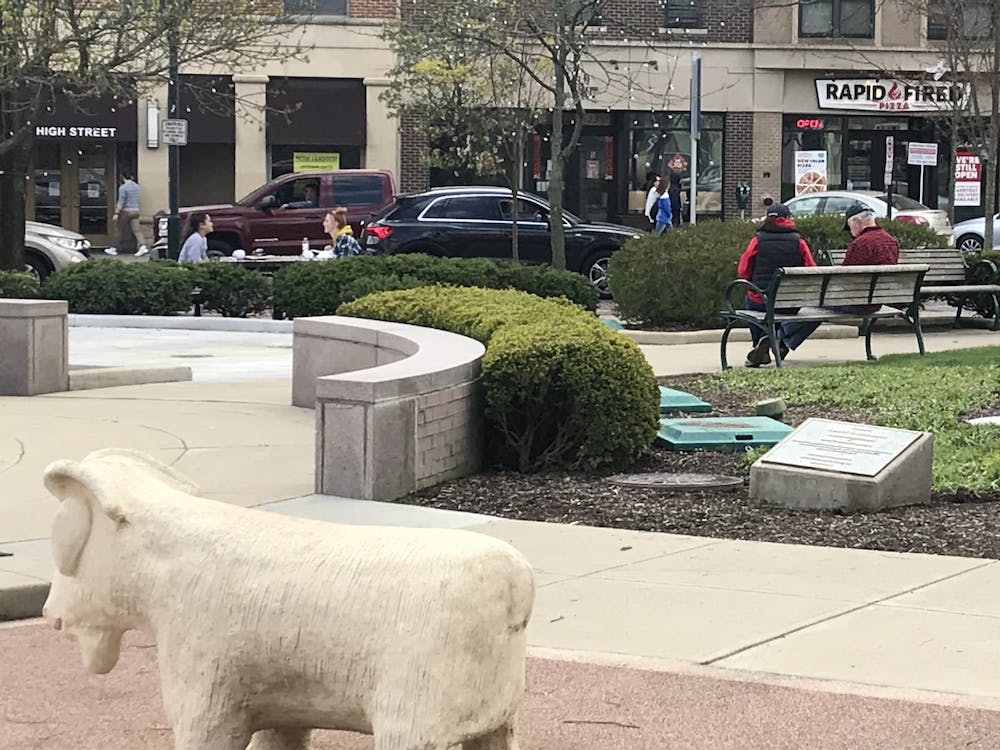 Four days after classes went online, an unofficial Miami GroupMe chat with 156 members and counting was born.  Junior Jannie Kamara started the chat on March 17, a day before she was elected president of Associated Student Government (ASG). Since then, the “OxVegas forever” chat, with its daily barrage of messages, has served as a source of support and entertainment for its members.