The owner of Oxford to You, Louise Lingler, said students made up about 80 percent of her business.

Some restaurants Oxford to You partners with have begun closing, one of the most notable being the Japanese restaurant, Sushi Nara.

Lingler doesn’t believe the shutdowns will have a lasting impact on her business, but she worries for the smaller, family-owned businesses in Oxford.

“I’m scared that some of these mom and pop businesses aren’t going to get through this,” Lingler said.

Because of Governor Mike DeWine’s stay-at-home order, many Oxford residents are discovering Oxford to You for the first time and utilizing its services.

“Restaurants are hurting,” Lingler said. “The community is hurting. We’re trying to do the best we can.”

Ann Kamphaus, owner of Books & Brews, a bar, bookstore and restaurant combination that opened uptown in July 2019, said she had to lay off all 38 of her employees. She and her two sons now work the store alone.

“It’s greatly affected us,” Kamphaus said. “Students aren’t here. No one can come and sit in our store. Our revenue is down. It’s probably at five percent of what we used to make.”

Kamphaus decided to convert part of her establishment into a small general store, where she has begun selling carry-out beer and wine.

She said she’s also reached out to some other uptown businesses in order to share resources and ideas for creating business.

“We want to be a business for when everybody gets back to normal,” Kamphaus said.

Books & Brews is one of the restaurants partnering with Oxford to You.

“We do use [Oxford to You] for delivery, and that's been a great relationship,” Kamphaus said. “That helps with a different, you know, revenue stream. But that's kind of what you have to do, be a little creative and think outside the box.”

With revenue down, Kamphaus is worried about staying open.

“I was hoping to make it to my one year anniversary in July,” Kamphaus said. “If I do and the virus is over, I'm going to have one heck of a party.”

Lingler estimated about 80 percent of the business restaurants are doing during the stay-at-home order is through her service, but even she is worried about her business’ future.

“Ordering delivery is a luxury,” Lingler said. “I'm not sure what's going to happen as money gets tighter with people.”

On Tuesday, March 31, Oxford to You donated 10 percent of its daily revenue toward the Talawanda Oxford Pantry & Social Services. Lingler said they were able to donate $482.

“They do a great service for this community,” Lingler said. “We’re so proud that we were able to contribute in a small way.”

Lingler said she’s grateful she’s been able to stay in business despite the coronavirus causing shutdowns across the state.

“We’re just doing what we can to promote each other and get the business that we can for our restaurants,” Lingler said. “Without these restaurants, I don’t have a business.”

Oxford is normally quiet without Miami University students on campus. But this time, it’s different.  The small college town usually simmers into a lull once students leave for both winter break and summer vacation. But with classes being moved online for the rest of the semester and Governor Mike DeWine’s stay-at-home order, many students decided to leave Oxford to be with family. For seniors, though, this decision meant walking away from the place they’ve called home for the last four years. 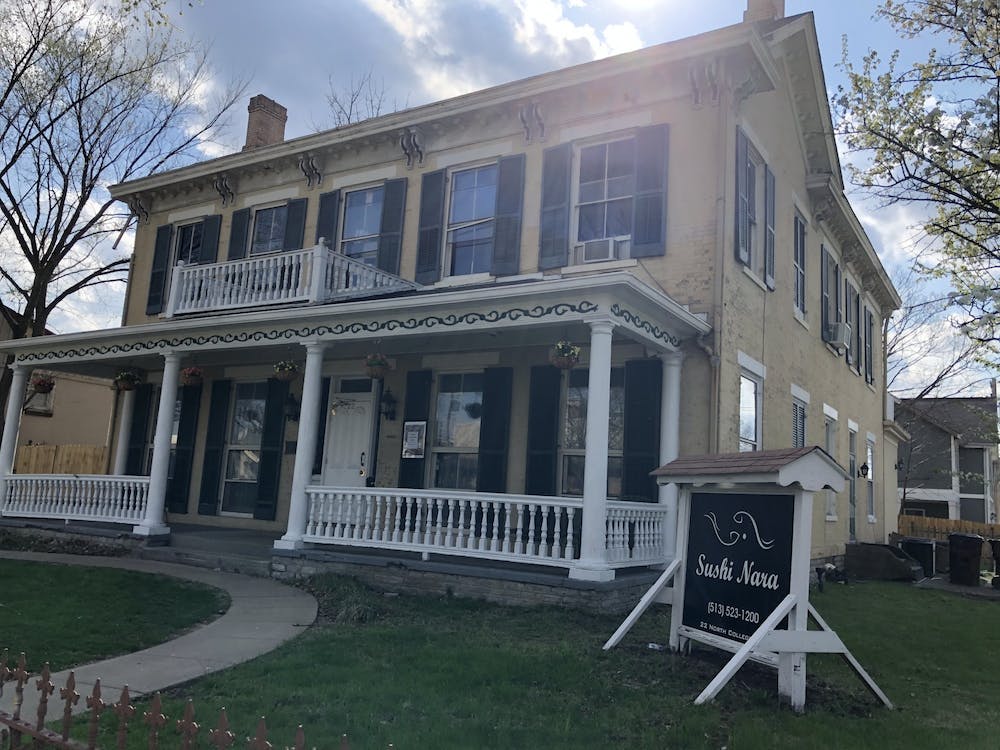 ‘That was like my second home’: Sushi Nara closes its doors

Sushi Nara, a popular Japanese restaurant in Oxford, has closed after its building was sold. The restaurant’s owner informed his employees of the closure Monday, April 6.