Legeay was almost two months into her study abroad experience with a third-party organization, School for International Training (SIT). She, along with her classmates, were supposed to be traveling through Tunisia, a small country in Northern Africa, and Italy.

Legeay arrived in Tunisia on Jan. 29. By early March, there were very few cases of coronavirus in Tunisia. But, Legeay and her classmates were still planning on traveling to Italy, a country that was already facing thousands of reports of the virus by that time.

Two weeks before the group was supposed to head to Italy, program directors announced there would be a change of plans. The directors instead suggested ideas of staying in-country or travelling to Morocco or Amsterdam.

The weekend before the class was supposed to travel to Italy, SIT told students to fly home.

“[Coronavirus] never really got that bad in Tunisia,” Legeay said. “The problem was that a lot of Middle Eastern and North African countries, and Tunisia included, were starting to close their borders.”

Rushing to book flights, Legeay and her classmates found flights taking them to Germany then to Chicago or New York.

“Those flights kept getting canceled because the Tunisian Prime Minister had come on and said that he was going to limit air travel,” Legeay  said. “Immediately, my fleet started getting canceled.”

She was finally able to find a flight home through Qatar, a small country in the Middle East, then to New York and finally back to her hometown of Cleveland.

“It was just absolute chaos, everyone's trying to get out of the country,” Legeay  said.

But her study abroad experience wasn’t exactly over.

Legeay chose to study abroad through a third-party facilitator, which meant her academic director was not an affiliate of Miami but instead was one who lives in Tunisia.

She, along with her classmates, continue to carry on their study abroad experience from home through online classes.

Before Legeay was forced to leave Tunisia, she had already finished her required courses. The next step would have been an internship with a social justice organization.

Due to the coronavirus, Legeay’s internship was cancelled and she is now working with an instructor on her independent study period, a research project on a topic of her choosing.

“It's a little frustrating at times,” Legeay said. “Especially because we're all from different parts of the country and then our academic director who's been leading our online classes is in Tunisia, which is about a five hour difference for me.”

Legeay said she’s been lucky with the time difference. She has class at 1:30 p.m., which is 6:30 p.m. for her academic director.

Legeay, an international studies major with a global intercultural studies co-major, chose SIT’s program because it not only helped fill Miami’s language requirement but allowed her to work with immigrants and refugees, something she hopes to do in the future.

“I'm supposed to be in Tunisia, taking an internship right now with a immigrant and refugee

organization,” Legeay said. “I'm supposed to be living with a host family and practicing my Arabic skills, which are pretty much gone at this point.”

Miami junior Brooke Lyles also decided to study abroad with a third party, The Council on International Educational Exchange (CIEE). She was in Senegal until her program was canceled and she was brought home.

While Lyles said her online classes are at convenient times for her, some of her classmates aren’t as lucky.

“I have friends, one of them lives in Thailand, so she’s taking that class live at like 1 a.m.,” Lyles said.

All of Lyles’ classes were taught in French as part of the curriculum. But, now that classes have moved online, she’s struggling to get the same experience.

“It's easier to talk in person than it is to read the emails,” Lyles said. “There's also a technology barrier to an extent, or not every professor is using Canvas in similar ways.”

Legeay said she’s been frustrated with the format of her online classes.

“I don't have that much to do,” Legeay said. “I have classes Monday and Friday, and it’s independent work, and it's not as structured. I'm definitely someone who needs more structure.”

At home in Cleveland, Legeay said she misses her host family more than any other part of the trip.

“It's just not the same experience,” Legeay said. 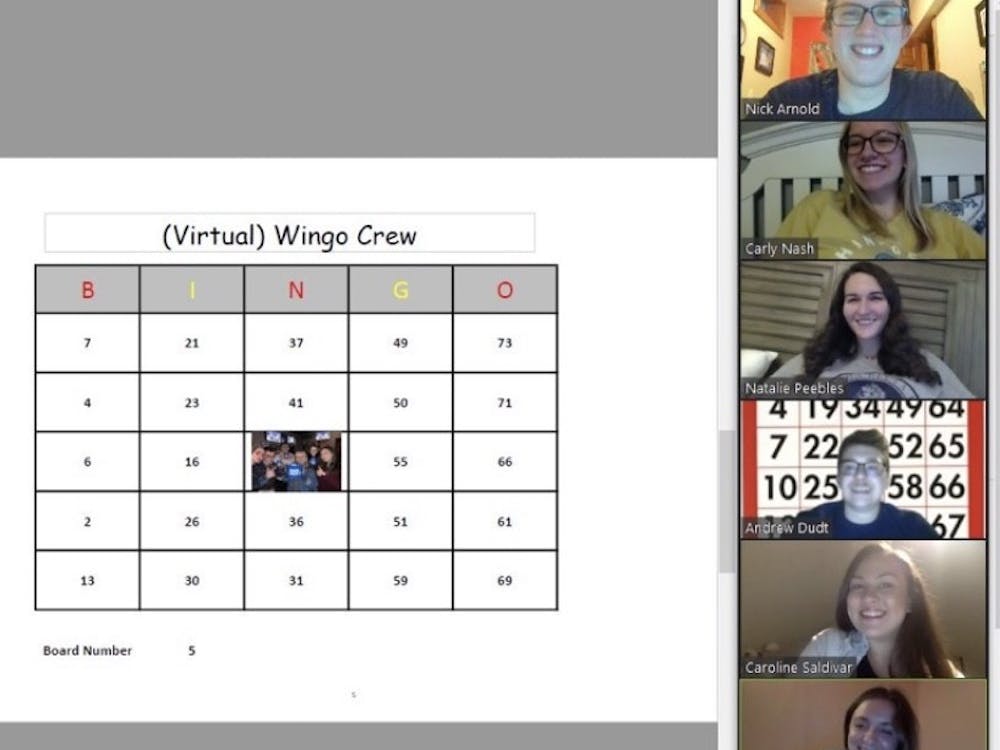 Caroline Saldivar first attended “Wingo Wednesday” at Left Field Tavern with a few friends a week before the start of the spring 2020 semester. A night combining a $0.70 wing deal with bingo, Wingo cycled through rounds of the classic game of luck. Prizes wenrg to the winners of each round.

As students grapple with online classes, the stay-at-home order and a generally different lifestyle than they thought they’d be living, the adjustment to pandemic life has proven to be unprecedented.  Throughout the transition, Dean of Students Kimberly Moore has sent several university-wide emails which include information on resources and updates about student affairs. The Office of the Dean of Students’ website states the office provides many resources for “students’ intellectual growth and personal development.” Dean Moore, having dealt with many coronavirus-related student life issues, has these suggestions and pieces of advice for students: