Barber in the bricks

Tucson DeShon drapes a white apron across a boy sitting in a dorm room desk chair.

“What are we looking for today?” he asks.

He pulls out a black bag containing a pair of scissors, a fine tooth comb and a trimmer with different attachments. Inside the dorm room decorated with the American flag and posters of Snoop Dogg, rap music plays and he mouths along. A mirror is propped up against the bed to show the client his upcoming transformation, and backpacks scatter the floor around it. He goes to work, and clumps of hair fall to the ground.

DeShon, a sophomore marketing major, started cutting hair during his junior year of high school. He’s a triplet, and one of his brothers, Turner, was tired of going to a barber to get his haircut.

“He was like, ‘alright, you learn,’” DeShon said. The next time he went to get a haircut, he watched as the barber did their job, taking note of the intricacy of each snip.

He started out with a cutting kit given to him by his dad and has made a small business out of his skill since arriving at college.

DeShon recalled giving his first haircut at Miami to his friend, Ashwin Shenoy, a sophomore political science major, during the first semester of his first year.

“I was honestly kind of nervous,” he said. “It would decide whether he would let me do it again and whether or not he’d recommend me to other people.”

The haircut was a success and DeShon gained confidence, as well as his first loyal customer.

From there, Shenoy was DeShon’s personal advertiser.

“One, it’s cheaper,” Shenoy said. “Two, [at] the good barbers [in Oxford], you have to schedule an appointment in advance. It’s a lot more convenient [with Tucson].”

Additionally, his clients feel at ease around him; it’s just like hanging out with a friend.

“I think one of the most important parts about getting your haircut is liking your barber,” said Ethan Klein, sophomore geology major and DeShon’s newest client. “Tucson is a really chill guy.”

DeShon loves the social aspect of the job as well.

“I like to think that people enjoy when the person cutting their hair is personable, too,” DeShon said.

After graduation, DeShon, hopes to go into sales, advertising or public relations.

“Ideally, I’d like to work with a company that does work in Spanish-speaking countries,” DeShon said, “bringing them products and services … because I’d like my work to have a positive impact.”

He has the same generous attitude when it comes to cutting hair, too.

At $8 a cut, with infrequent appointments, he’s not in it for the money.

“I just like helping people out, specifically saving money,” DeShon said. “I also like satisfying people and making them happy wherever I can, even if it’s just them looking in the mirror and being happy with their new cut.” 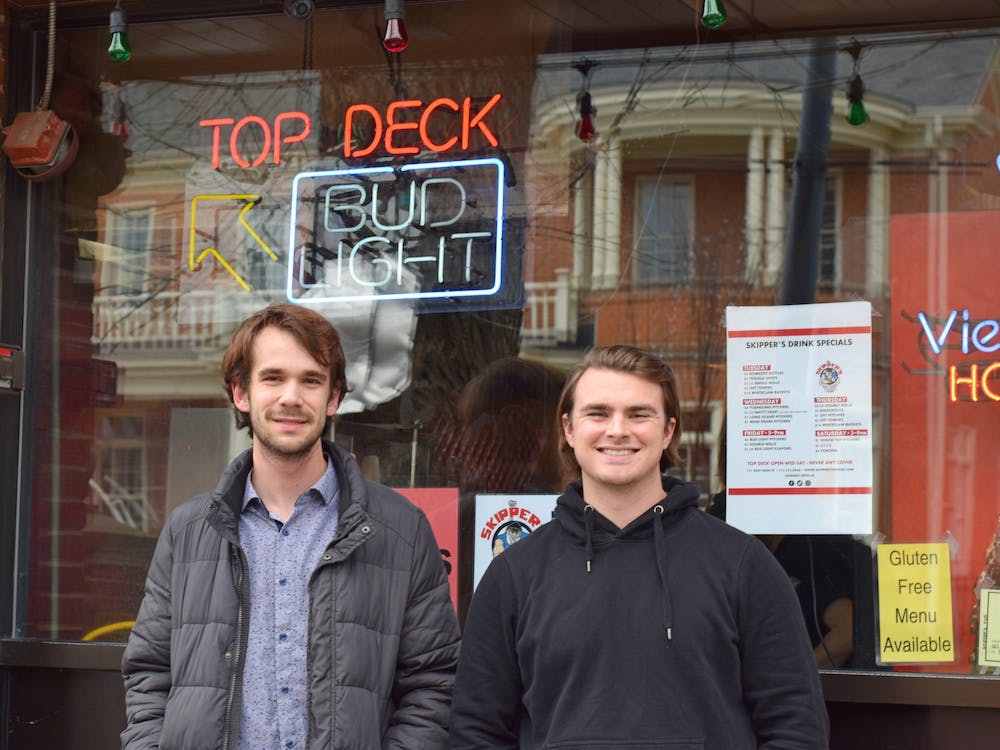 For 10 points: who are the hosts of Top Deck Trivia?

On the first Wednesday of the spring semester, the line to get into Top Deck extended all the way down the stairs.   Inside, the bar was buzzing with people carrying pitchers of beer to their tables and teams trying to find a space to sit — or at this point, stand.  Ben Storsved, who graduated in December, and junior Hunter Wotruba stood in the back corner of the bar, behind a laptop and sound system and under a glowing Chicago Cubs logo sign — one of many neon signs decorating Top Deck’s walls.  As the clock strikes 10 p.m., Ben leans in and speaks warmly into a microphone.  “Hello friends and welcome back to another fantastic week at Top Deck Trivia!”