The RedHawks lose to Louisiana in the LendingTree Bowl

MOBILE, Ala — Football giveth, and football taketh away.

Down by 10 points at their own 20-yard line, the RedHawks caught a break.

Freshman quarterback Brett Gabbert, under pressure, threw an interception. It would’ve rendered the LendingTree Bowl virtually over with four minutes left. Instead, a flag was thrown for defensive pass interference.

Gabbert responded to the second chance with a 63-yard bomb to freshman wide receiver James Maye, advancing to the Louisiana 2.

After two incompletions and a one-yard rush set up fourth-and-1 from the goal line, redshirt junior center Danny Godlevske snapped the ball past Gabbert into no man’s land.

And, that was that.

“Unbelievable football game,” Miami University head coach Chuck Martin said. “I watched two football teams absolutely get after each other’s ass for four quarters. And it was fast, and it was hard-hitting, and it was fighting for every inch.

“Disappointed in the loss. Felt like it was there for the taking.”

The one thing Miami couldn’t do was get into an early offensive shootout with the 11th best scoring offense in the nation. In the first half, mission accomplished.

The game was a battle for field position early, as both teams punted twice in the scoreless first quarter.

To start the second, Miami redshirt freshman running back Tyre Shelton pushed the RedHawks into Louisiana territory with a 26-yard run, and they capitalized. With a balanced run-and-pass attack, they scored the first points of the game on a five-yard touchdown scamper by junior running back Jaylon Bester.

Louisiana was quick to respond, hitting a field goal on the next possession and following it with a touchdown to take the lead on its final drive of the half.

Martin elected to play it safe and run out the final minute of the half, instead of aggressively trying to get into field goal range for senior kicker Sam Sloman.

“We actually were discussing [trying to get in scoring range] a little bit,” Martin said.  “But again, can you go 80 yards and score? Yeah. Have we done that a bunch this year? No. If you turn it over there and you’re down, 17-7, you’ve just given away a chance to win the bowl game.”

Both teams scored on their first drives of the second half.

After a 39-yard Sloman field goal made it 17-10, Lewis-to-Bradley struck again. This time, Lewis found Bradley from 12 yards out.

Lewis won LendingTree Bowl MVP for his performance. He threw for 246 yards and two touchdowns while consistently keeping plays alive with his legs. Most of the time, that occurred inside the pocket, but he got out and ran, too, finishing with a game-high 62 rushing yards.

“He’s obviously a very good player,” senior defensive lineman Doug Costin said. “He’s a very shifty, smaller quarterback. We knew, coming into the game, that was one of the things he relies on.”

Martin said defending Lewis is “kind of like Rocky Balboa chasing the chicken.”

Three minutes into the fourth, Bester kept Miami in the game with a one-yard touchdown run.

The RedHawks trailed by only seven.

After the Ragin’ Cajuns punted, they made up for it on defense, forcing Bester to fumble inside his team’s territory. They hopped on the loose football and turned it into points three minutes later.

Then, Gabbert threw the interception. The play was called back due to pass inference.

He redeemed himself with a deep ball to James Maye.

Third down. Bester carried for one yard.

“We were going uptempo, trying to catch them off-guard,” Gabbert said. “We were going to run the ball. They were moving around at the line. I hiked the ball, and I think it just slipped off Danny’s fingers. That happens sometimes. You can’t control it. Never going to blame Danny. Danny’s a first-time All-MAC center. It just happened to be at that very play on fourth down. That didn’t lose us the game.”

The game ended three minutes later, and Doug Costin and the rest of the seniors walked off a football field for the final time as RedHawks.

“I can’t really put it into words right now,” Costin said with tears in his eyes. “It sucks knowing I’m not going to be with these guys anymore.”

After a Mid-American Conference Championship and the most successful season in a decade, what does Chuck Martin think is the legacy of this Miami football team? 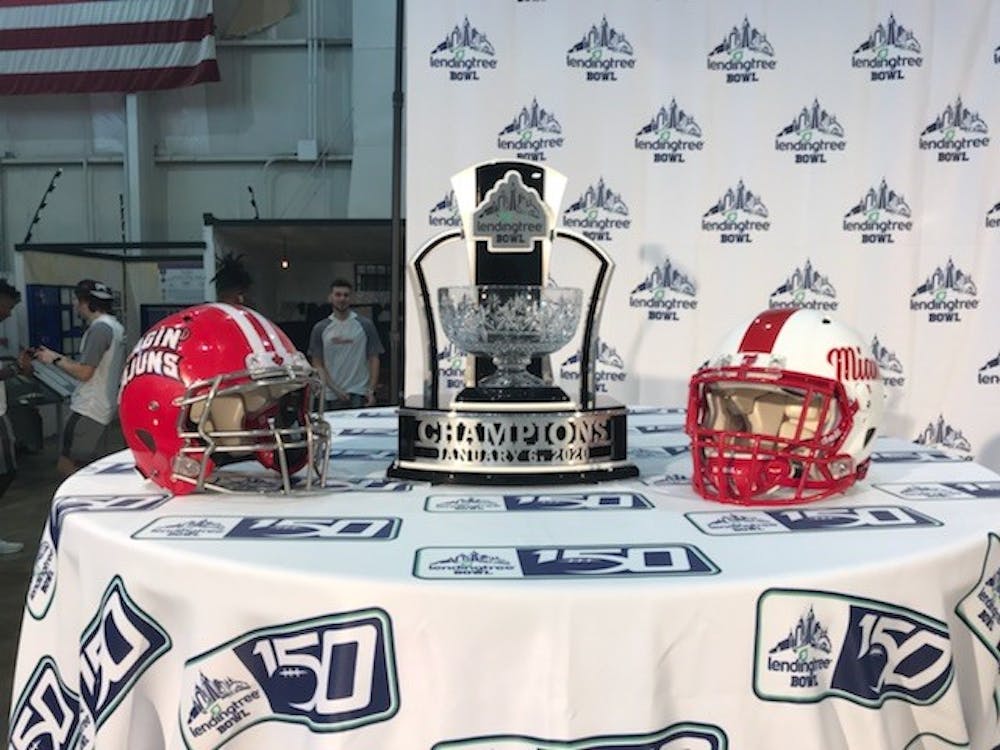 The 2020 LendingTree Bowl will kick off Monday night at 7:30 p.m. EST inside Ladd-Peebles Stadium.