In an email to all faculty and staff on Jan. 23, President Greg Crawford, who received a $75,000 bonus for the 2019 fiscal year, announced this plan would be expedited, following approval from the Board of Trustees (BoT) at its December meeting. The updated plan will result in savings of more than $24 million: $7 million more than the original.

While the original goal was to cut $3.5 million in fiscal year 2021 from non-academic departments, the university now plans to cut more than $15.3 million in the same time period.

Michele Gaither Sparks, vice president and chief marketing and communications officer, said the acceleration of the plan was due to an “unprecedented change in higher education,” referencing the fact that enrollment at universities nationally is declining due to a decrease in students of college age. Sparks said the university was aware of the decline and has been preparing for it.

"It was decided that we needed to accelerate the reductions in order to develop new academic programs and scholarships sooner rather than later,” Sparks said.

In the email, Crawford said 40 staff positions would be cut in order to fund student scholarships and academic programming. Sparks said the number is now 39 because it was determined that one of the positions didn’t need to be eliminated.

The university hasn’t yet decided how to distribute the scholarship funds, Sparks said. Academic initiatives to be supported by this money are still being determined but may include new programs like data analytics and nursing, which were created as part of the Boldly Creative Initiative, which seeks to create new faculty-developed academic programs.

“Miami is taking proactive measures to be able to invest in innovative and in-demand academic programming and to grow student scholarships to attract the best and brightest students in this competitive landscape,” Sparks said.

The university is eliminating five positions from University Communications and Marketing, seven from Enrollment Management and Student Services, 14 from Finance and Business, six from Student Life and seven from the regional campuses. Each vice president made the decision as to where to make cuts within their division.

“We strive to make these decisions in ways that least impact our employees and in ways that allow units to focus on their most critical operations and streamline functions,” Crawford wrote.

Affected employees will be given outplacement assistance and job counseling. They were also encouraged to apply for other jobs across the university, Sparks said. Unclassified staff, meaning those who aren’t paid hourly, will be given a month of paid professional leave if they haven’t obtained other employment within five months. They are also entitled to one week of severance pay for every year worked after five years if they cannot find employment within that time frame, Sparks said.

According to a list of frequently asked questions provided by Sparks, Miami considered offering early retirement but ultimately decided this was not in the best interest of the university.

“Miami is not trying to cure a budget deficit,” the document stated. “The reductions need to be made in strategic areas. Offering early retirement often results in the university losing employees in key areas where reductions are not needed or wanted.”

The 39 layoffs will save the university $3.3 million.

These budget cuts come after a defunding of higher education in recent years both across the state of Ohio and nationally.

According to the Center on Policy and Budget Priorities, state funding for two and four-year universities in the 2017-2018 school year was $6.6 billion below what it was before the 2009 recession after adjusting for inflation. The state share of instruction at Miami in the 2019 fiscal year was 7.76 percent less after adjusting for inflation than in the 2008-2009 fiscal year, according to data from the Ohio Department of Higher Education.

In 2019, Miami spent $190,000 on lobbying the federal government for “higher education and research funding,” according to the Lobbying Disclosure Act database. He also lobbied the state, but it’s unclear how much money was spent.

As a result of these drops in funding, universities across the state have been forced to find ways to reduce spending.

Last spring, Ohio University’s Athens campus announced their academic colleges will be required to cut $19.3 million over the next four years, The Athens News reported.

According to The Columbus Dispatch, “the university will look to ‘strategic retirements,’ voluntary separation agreements with tenured faculty and the elimination of open positions to minimize the need for a reduction in force.”

In 2017, Kent State University created a University Employee Separation Plan in an effort to meet its objective of cutting 1 percent of the university’s operating budget, which amounts to about $7 million. The plan rewarded employees who had worked at the university for 15 years or more for retiring by providing them with their entire annual base salary to a certain maximum, divided into payments over five years, according to the university’s website.

Wright State University was forced to cut $30.8 million from its budget in 2017 and reduced spending by $53 million in the 2018 fiscal year, according to the Dayton Daily News. It will take the university more than 20 years to recover, the Daily News reported.

The Miami Student reached out to David Budig, chair of the BoT, who was out of the office traveling. Ted Pickerill, secretary to the BoT and executive assistant to the president, and David Creamer, vice president for finance and business services and treasurer, both referred The Student to Sparks.

The following reflects the majority opinion of the Editorial Board. Happy spring semester, Miami University! It was an eventful J-Term, and we’ve got a lot to catch up on. The Miami RedHawks played (and lost) the Lending Tree Bowl, that sushi place finally opened up in Armstrong and the university announced 39 staff positions will be eliminated as of July 1, 2020.  Surprised by that last one? We bet!  On Jan. 23, University President Greg Crawford sent an email to Miami faculty announcing 40 staff positions would be eliminated across the Oxford and regional campuses. Since then, The Miami Student confirmed one of the initial 40 positions will not be cut, but there was no follow-up from Crawford or the administration communicating that change.

Last July, Miami University implemented a new budgetary system where, instead of having each college’s dean distribute money to the departments within their schools, individual departments will now apply to the provost’s office for funding. 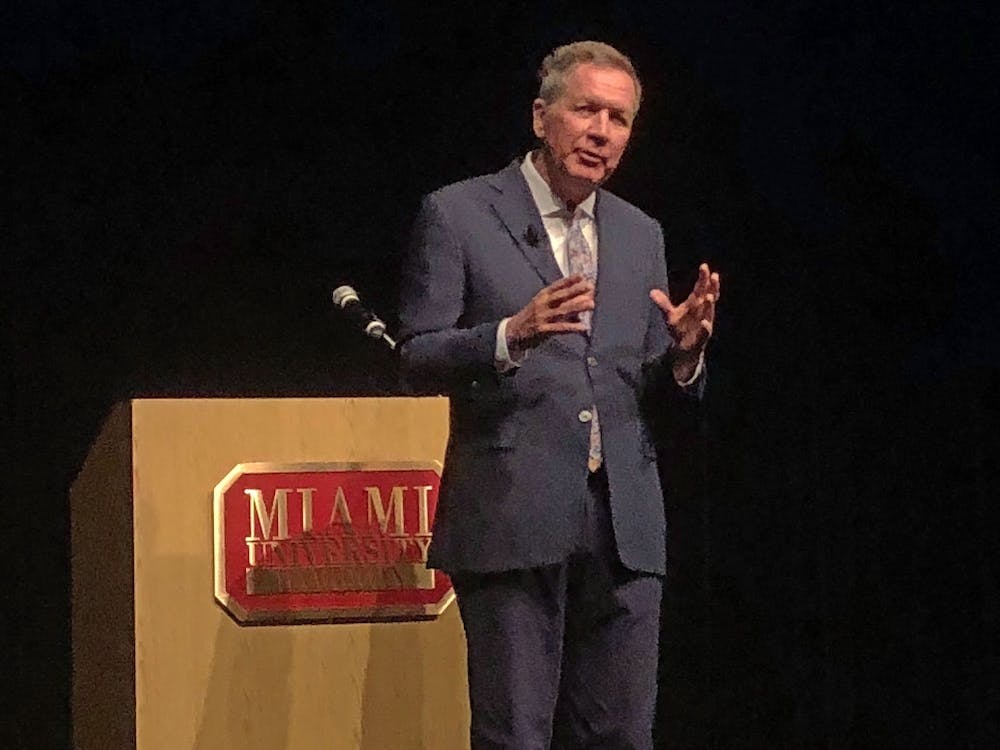 Former Ohio Governor John Kasich may have run as a Republican, but that isn’t the main way he chooses to identify himself.  “I’m an American more than anything else,” he said in an interview with The Miami Student. “I want to be respectful to people who are in the Republican Party; it’s my vehicle, but it has never been my master.”