Someone had to take the first snap. But, for more than five months, Chuck Martin had no idea who that someone was going to be.

At the end of spring practice in late April, Miami’s head coach was asked if the competition between those two was still deadlocked.

“Yes,” Martin said with a smile before saying the audition could creep through fall camp and into the regular season.

He didn’t mention Brett Gabbert, one of his top freshmen recruits, who, with one brother in the NFL and one who was former quarterback at two Division I universities, has a family pedigree that rivals any player in college football.

Gabbert hadn’t even graduated from St. Louis’ Christian Brothers College High School and was still two months away from showing up in Oxford.

May, June and July all passed. No progress. No news.

In August, Williamson dealt with injuries, allowing Gabbert and Mayer to split the majority of the first-team reps. Martin insisted it wasn’t the kill shot to Williamson’s chances.

“I would be shocked if you don't see multiple quarterbacks play against Iowa,” Martin said two weeks before Miami’s regular-season opener. “But not necessarily evenly. There may be a pecking order. I wouldn't say there's one yet … We like all three, and they're all doing good things.”

Martin remained coy. His starting quarterback wasn’t announced until Gabbert, who wasn’t even in the competition when it commenced, trotted out onto the field at Kinnick Stadium to take the first snap.

After the game, a 38-14 loss to the Hawkeyes, Martin said the competition wasn’t finished, but Gabbert would start the following week. He said the same thing following the RedHawks’ Week Two victory over Tennessee Tech.

The question of who deserved to start at quarterback never came up again.

Despite a myriad of minor injuries throughout the season, Gabbert held onto the position and started every game. He threw for 2,163 yards and 11 touchdowns, and added three more scores on the ground while leading the RedHawks to an 8-5 record.

Three days before the conference championship game, Brett Gabbert was named the MAC Freshman of the Year.

None of the headlines were good for Miami.

Martin, on a media conference call, provided the first blow.

“It’s kind of like going to recess, and they have the first 85 picks,” Martin said about his team’s game against Ohio State, creating a media storm.

Then, the betting books in Las Vegas listed Miami as 40-point underdogs. Blow No. 2.

Once Sept. 21 rolled around, the Buckeyes proved Martin correct. They beat the RedHawks, 76-5, after scoring 76 consecutive points. Ohio State scored 42 points in the second quarter alone, tallying its highest scoring period since 1960.

With Miami trailing, 49-5, the game was over in every aspect but the game clock at halftime.

Blow No. 3. It was an embarrassing defeat, especially one week before the start of the RedHawks’ conference schedule.

Yet, redshirt senior running back Maurice Thomas realized, after the loss, his team could be special this season.

“Crazy enough, [I knew we would be good] after the OSU loss,” Thomas said. “Everyone was like, ‘Oh, my gosh. You guys got beat that bad?’ But we were like, ‘We’re good.’ We’re in the locker room like, ‘We’re going to take what we can from this loss … and get better.’

Seven days later, against the Buffalo Bulls, Miami trailed 14-3 early in the second quarter. Then, the RedHawks hit full stride.

They scored the next 31 points to beat Buffalo, 34-20, and won two of their next three games to tie for first place in the MAC East division.

“I’d probably say the Buffalo game [was our turning point],” senior defensive lineman Doug Costin said. “That week of practice after the OSU loss, it just kind of turned for everyone. We realized this was not who we are … I feel like, that week, we definitely kind of came together and told ourselves, ‘This is never going to happen again no matter who the opponent is.’”

The RedHawks traveled to Athens, Ohio, and into their most important game of the season Nov. 6.

They were tied with the Bobcats for first place in the MAC East, and the winner of the Battle of the Bricks rivalry game would have an inside track to the MAC Championship in Detroit. If Miami won, it would be ahead by one game in the standings with three to go.

It would control its own destiny.

From the beginning, the Bobcats and their fans didn’t make it easy. The atmosphere they created was the most intense the touchdown-underdog Miami faced against a MAC opponent this season.

Twice, the best quarterback in the league, Ohio’s Nathan Rourke, put the Bobcats in scoring range, and twice, Miami survived without giving up points.

Then, with the score still tied at zero in the second quarter, their kicker, Louie Zervos missed a 50-yard field goal to the left of the uprights. A drive later, Miami freshman defensive lineman Lonnie Phelps strip-sacked Rourke, and Costin corralled the football.

Instead, after the first play of Miami’s ensuing drive, it said 7-0, Miami.

Junior running back Jaylon Bester sped 45 yards to the end zone, invigorating a previously dead offense. Just like that, Miami led despite being outplayed in most statistical categories.

But with every RedHawk attack, Ohio offered a counterpunch.

Miami went up, 14-7, in the third, but the Bobcats tied it on the third play of the fourth. The routine continued, as Miami freshman wide receiver James Maye scored a touchdown on a deep post route, but Rourke knotted the score at 21 a few minutes later.

The Ohio defense held strong, forcing the RedHawks to the far edge of their field goal range with two minutes and 45 seconds left.

It wouldn’t be the last time Sloman would make a clutch kick this season, either.

The RedHawks’ defense stopped Ohio on its next drive. They gutted out a 24-21 victory.

One week later, Miami beat Bowling Green, and Buffalo lost to Kent State, ensuring the RedHawks a trip to the MAC Championship.

For one half, the RedHawks contained Central Michigan’s high-flying offense, but they still trailed, 14-10.

Not a single player on either sideline had played in the conference championship game before. The Chippewas were favored by seven coming into the contest, and they appeared to be on their way to covering that spread.

“The halftime reporter told me, ‘You need to put some drives together,’” Martin said.

It was a logical point. Miami, led by a true freshman quarterback, needed some momentum. Yet, Martin laughed at her.

“I said, ‘Ha ha ha, you don’t know us very well. We’re not putting no drives together,’” Martin said. “I said, ‘We need to score quickly. That’s what we do. We need to strike. We need points. We’re not going to go on four or five drives. That’s not us.’”

He relayed the same message to his team in the locker room.

On Miami’s first offense play after halftime, Maye caught a 35-yard bomb down the right sideline. Sorenson capped off the drive two plays later, taking a screen pass 31 yards to the house. 17-14, RedHawks.

That score held through the remainder of the third quarter.

After Sloman crushed another field goal through the uprights to give Miami a 20-14 advantage, Central Michigan needed a score.

The Chippewas assembled their best drive of the second half up to that point, pushing themselves inside Miami’s 30-yard line.

Miami’s senior defensive back intercepted the ball and ran it back for a touchdown. A penalty negated the score, but the RedHawks stole possession from Central Michigan, killing its momentum and its attempt at the lead.

The RedHawks moseyed down the field in 10 plays, mostly rushes by Bester. They drained six minutes off the clock before the drive stalled.

Enter, Sam Sloman. Three more points on the board for Miami.

Central Michigan scored a touchdown but failed to recover its ensuing onside kick. Sloman kicked another field goal, making it 26-21. His teammates hoisted him into the air as the crowd chanted his name.

“I was just ready for the last 30 seconds to be over,” Sloman said of his thoughts after his fourth field goal of the game.

Martin teared up while talking about the pride and love he has for his team in a postgame interview. He tried to remain out of the spotlight during the on-field celebration by congratulating Central Michigan players. He wanted his team to enjoy the moment and the camera flashes.

The next day, Martin and his coaching staff were in the middle of a staff meeting when they learned Miami was headed to the LendingTree Bowl. They didn’t celebrate.

They simply continued their meeting. 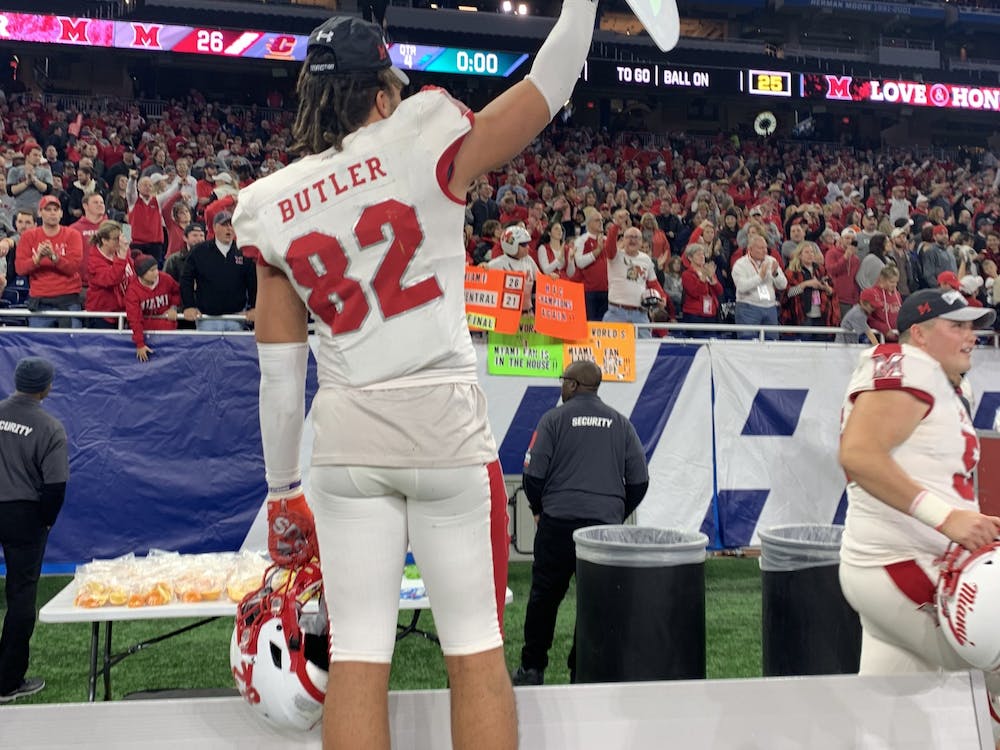