Street preachers cause frenzy on campus

Around 150 students gathered around and shouted back and forth with two street preachers at the corner of Spring Street and Maple Street this afternoon.

The men began their demonstration in front of the Shriver Center around 11 a.m., quickly attracting a crowd. Around 11:30 a.m. or 12 p.m., the crowd grew large enough that the police placed barriers between the evangelists and students in order to keep the sidewalk clear and keep the students safe, said Scott Walter, assistant vice president for student affairs.

Administrators and police stood around the perimeter of the sidewalk trying to keep students off the street.

One of the preachers, who only gave his first name, Jacob, explained that the preachers are evangelists who travel to different college campuses to spread their beliefs.

His companion, John, held a sign that said “only Jesus Christ can save you from sin and hell. Read the Bible for the details.”

The pair said they aren’t affiliated with any organization.

“We’re here just representing Jesus and calling sinners to repentance,” John said. “God wants to give mercy to every sinner who wants to come to him, but we’re also warning people that if they don’t turn away from their sins, they’re going to be damned to hell and judgement.”

They told students that if you are gay, you will probably be sodomized and thrown off the top of buildings. They told female students that they must submit to their husbands.

“Where did the whore go?” one of the men asked the crowd at one point, while looking for a female student who’d argued with him a few moments prior.

Students shouted at the men, some trying to debate and have a conversation. At one point, John shouted “wicked,” and a group of students shouted back, “you’re wicked.”

Some students made signs and engaged in a chant of “Boomer!” at the men. Others videotaped the demonstration on their phones and a few talked among themselves from the side about how they felt.

“It’s funny. This dude is making a fool of himself out in public,” sophomore Camden Smith said. “I think this crowd says a lot. I think people find it more funny than anything else.”

“They do have the right to do this, but it’s not like anyone has to agree with them,” first-year Joseph Supino said. “It’s always interesting to see how aggressive they get with people but also how aggressive people are with them as well.”

Across the street, in front of the Sesquicentennial Chapel members of Intervarsity Christian Fellowship (IFC) sat outside opposing the demonstration across the street and inviting passersby to speak with them. Inside the chapel, members of Cru prayed for the university.

“We believe strongly that God is a God of love and acceptance,” said Intervarsity member and sophomore Emily Anzaolne. “Unfortunately, there are a lot of people in the world who claim to be Christians but preach hatred. And think if you do one wrong thing you're going to hell. That’s not the God we believe in.”

The demonstrations concluded around 3 p.m. 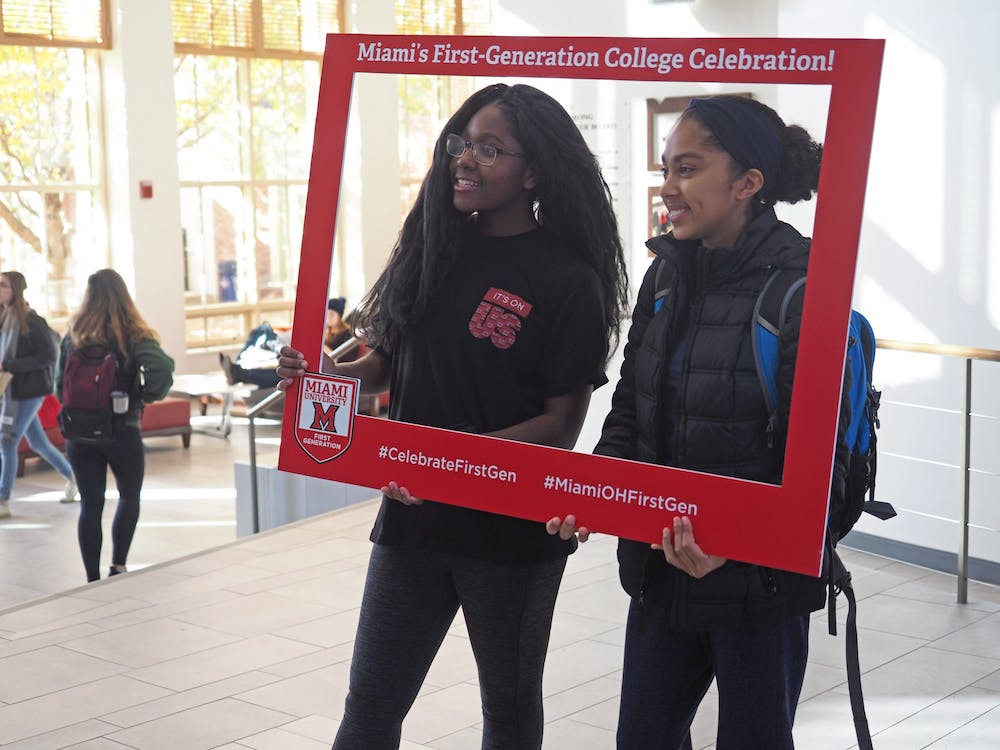 There was an energy in the air, and Adrianna Patch could feel it. Miami University’s campus felt like another world, but one that would welcome it’s newcomers with open arms.