The 150th anniversary of college football.

The Battle of the Bricks.

These were the stakes.

This was the result:

Miami football jumped around and stormed the field after winning its second consecutive game against the Bobcats and grabbing the sole top spot in the MAC East Wednesday night at Peden Stadium.

“Somebody had to lose a game tonight that no one deserved to lose,” head coach Chuck Martin said. “We’re happy. We’re finally to the point where we can go toe-to-toe with these guys.”

After Miami won the opening coin toss and deferred to the second half, the Bobcats drove down the field into the red zone. Two chunk plays put them in striking distance, as senior quarterback Nathan Rourke ran for 15 yards before completing a 20-yard pass to redshirt junior wide receiver Cameron Odom.

Redshirt freshman running back O’Shaan Allison locked his eyes on the end zone but fumbled 13 yards into a run on the Miami 3-yard line. Sophomore defensive lineman Kameron Butler jumped on it, giving the RedHawks the ball.

This time, the RedHawks cashed in on a Bobcat miscue. Junior running back Jaylon Bester broke free on the first play of the drive. He evaded a couple defenders and outran everyone for a 45-yard touchdown, putting his team up, 7-0.

That was the extent of the RedHawks’ first-half offense. They gained only 104 yards, while the Bobcats put up 238.

Not wanting to be outdone, junior running back De’Montre Tuggle responded with his own 50-yarder to put Ohio at Miami’s 11-yard line. Three plays later, Rourke completed a 4-yard touchdown pass to redshirt freshman wide receiver Ty Walton to knot the game at 7.

The score held through halftime.

On Miami’s first drive of the second half, Jack Sorenson somehow ended it with a tippy-toed catch off a deflection by an Ohio defensive back in the back of the end zone. The 21-yard touchdown gave Miami a much-needed dose of offensive momentum and push it ahead, 14-7.

The possession took five and a half minutes, and provided the only points of the third quarter.

“He didn’t get open, but somehow, Jack makes plays,” Martin said. “And he made a crazy play on that one.”

After three quarters of tame offensive football, the start of the fourth brought offensive fireworks.

Rourke muscled in for a 1-yard, game-tying touchdown on the quarter’s third play.

“He’s Jim Brown playing quarterback,” Martin said. “I don’t know. It’s every week, you can’t tackle the son of a gun … Thank God he’s a senior and doesn’t have any college eligibility left.”

After a 63-yard reception by freshman wide receiver James Maye kicked off the RedHawks’ next drive, Bester scored from seven yards out to gift them a 21-14 lead.

The Bobcats assembled a 7-play, 75-yard drive that was capped by another Rourke rushing touchdown — this time, a 9-yarder.

Attempting to regain the momentum they lost after halftime, the Bobcats buckled down and forced a Miami fourth down at their 35-yard line. Senior kicker Sam Sloman came out to attempt a 53-yard field goal, and he put it through to tie his career-long and give the RedHawks a 24-21 advantage.

Taking over at their 35, the Bobcats got a first down. Three yards shy of midfield, 2:39 remaining.

The RedHawks return to Yager Stadium next Wednesday. Their matchup with Bowling Green is scheduled for 8 p.m. and will air on ESPN2/ESPNU. 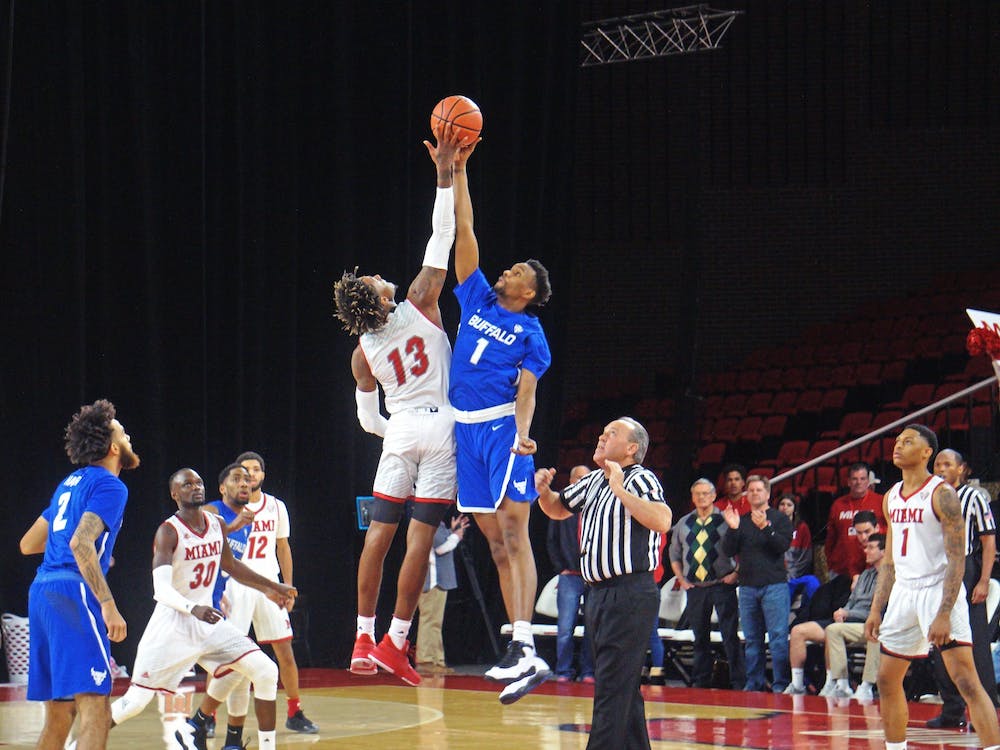 Men’s basketball is full of experience and ready to win

Since Jack Owens arrived in 2017, he has attempted to instill a winning culture.