What is a VSCO girl? The trend taking social media by storm

First-year Tori Rammelsberg first posted a photo of her intricate makeup look on VSCO in 2018. Since then, she has continued to post on the photography app regularly.

But now, this artistic individual with a knack for photography struggles to stray away from the label society has given girls like Rammelsberg who use the app.

The app, formerly used for artistic photography, has been flooded with scrunchies, Birkenstocks and Fjallraven Kanken backpacks.

While most of these brands have been popular for several years, put together they form the ingredients for the internet’s latest aesthetic: “VSCO girl.”

Since the trend first took off, Rammelsberg has seen more and more heavily-edited photos of Hydro Flasks and cowry shell necklaces on her VSCO feed.

The app has been around since 2011. However, the label “VSCO girl,” and the lifestyle it implies, has only just begun.

This trend first made headlines last summer, from Instagram to newly trendy, lip-sync app, Tik Tok. And its target demographic seems to be Generation Z, with 75 percent of VSCO users reported to be under the age of 25, VSCO Vice President of Communications, Julie Inoyue said in an NBC News interview.

These Gen Zers associate themselves with Brandy Melville fashion, a clothing brand based out of Italy. The brand features one-size only clothing, with everything from metal heart belts to Rolling Stone graphic tees. Girls often try to emulate the models depicted on the brand’s Instagram feed.

VSCO girls’ fashion choices are central to their persona, but another important aspect to the aesthetic is their propensity for environmentally friendly brands and products.

The motto — for many of these girls —  is something along the lines of, “Save the turtles.”

To cut down on ocean pollution, many VSCO girls are featured on the social media site using metal straws and Hydroflasks, which are insulated stainless steel water bottles. While any actions made to improve the environment are usually viewed positively, many college students believe VSCO girls are playing up their “green image” to their feed.

“They are piggybacking off people who actually care,” first-year Karis Gladieux said.

These negative connotations have caused some girls to associate VSCO with “being fake,” and turned them off from the app.

But others could not care less.

Brenner posts on VSCO about once a month and doesn’t understand the relationship between the trend and the app.

But VSCO girls aren’t solely relegated to posting pictures of their outfit or the latest green accessory. They also take photos of remodeled closets or small spaces labeled, “VSCO hangouts.” These hangouts can be classified as aesthetically pleasing areas, typically adorned with some sort of tapestry and string lights.

But with this new wave of VSCO trends, Gen Zers like Rammelsberg post less on the app so as not to be caught up in the VSCO girl trend.

The fear of being seen as “inauthentic” has strayed some girls on Miami’s campus away from the growing trend, even if they are interested in some of the styles portrayed on these accounts.

Rammelsberg, who posts on VSCO once a week, said that, “to be labeled a VSCO girl is the same as being labeled a frat boy”— both have big reputations, neither can be ignored.

While some give VSCO girls abad rap, it certainly has received a lot of media attention.

Several outlets have discussed the VSCO girl trend, and it has become a well-known joke on many social media feeds. So, while those who strive to be authentic in their daily lives may scoff at the trend, they can’t deny that it is receiving a lot of attention:  Vox, Rolling Stone and even NBC have taken a shot at trying to make sense of the trend.

While Brenner believes that some of the profiles that subscribe to the trends are "stupid," he still mocks the aesthetic on Instagram and Tik Tok because it has become so relevant.

One of the biggest sticking points people regularly mock VSCO girls for is their use of the phrase “and I oop,” quoting a recent viral clip taken from a drag queen’s YouTube video.

The term is supposed to be used in unexpected situations, like when you drop a water bottle on the ground.

But many Tik Tok users make fun of VSCO girls by filming themselves exclaiming, “And I oop,” as they drop a Hydroflask.

Because the trend has gained so much notoriety through social media, many people have become more self-aware about their personal style.

Gladieux, the first-year who doesn’t care for the app, has a collection of scrunchies simply because they work better for her hair, but she does not want to be classified as a VSCO girl.

Gladieux even has two Kanken backpacks, but she does not subscribe to the slang, or style of the VSCO girls in any other way.

And while the trend has lasted through the summer, Rammelsberg and others anticipate that it will disappear as quickly as it surfaced, leaving VSCO to return to its creative roots as an outlet for the artistic community. 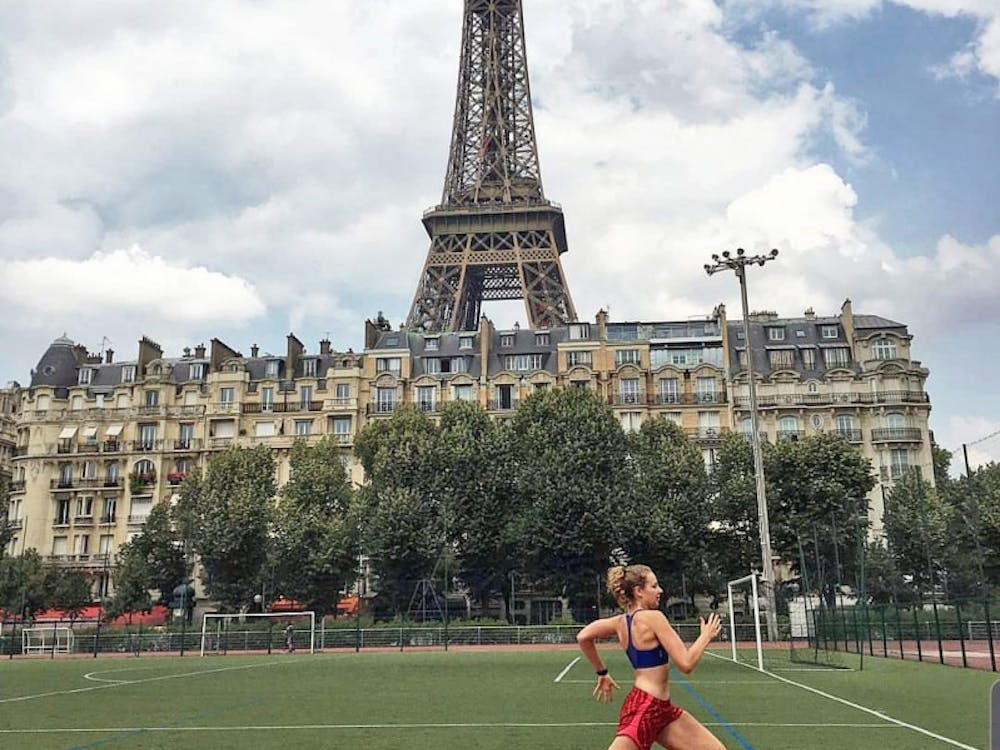