Talk the talk, CROP the walk

On Saturday morning, over a thousand Greek life members gathered at Uptown Park for CROP Walk, a 27-year-old tradition intended to bring awareness to world hunger, as well as hunger that affects Oxford directly.

Attendees dressed in running shorts and shirts sporting their Greek letters. Some sororities wore matching Greek Week shirts that were spotted as they mixed with other sorority and fraternity members.

With an 11 a.m. start, most people appeared tired, but cheered up as they run into friends. They talked and laughed while waiting for the walk to begin.

CROP stands for “Communities Responding to Overcome Poverty,” and it’s part of the Church World Service organizations. Proceeds are used both internationally and domestically to help people rise up out of poverty and to help local communities with disaster relief and refugee resettlement.

Under the pavilion, everyone drops off cans of food in their designated area and scans the QR code to check-in. Under the Gamma Phi Beta and Chi Omega signs, the stacks were high and thousands of cans were donated. Pop music played as members of Tri-Council used the speakers to direct everyone where they need to be.

The cans collected will be donated to the Talawanda Oxford Food Pantry and Social Services (TOPSS). It’s the first year all food donations will be donated locally. Tri-Council has a philanthropic mission to donate a quarter of a million dollars to TOPSS in the next three years. The money will be going toward a new building and food pantry.

Senior Olivia Groves, the VP of Programming for the Panhellenic community, worked with other members of the Tri-Council to plan Greek Week.

“Essentially, it’s a lot of behind the scenes logistics,” Groves said. “But most of the work comes around the week itself when we are creating the rules, organizing the teams, advertising the event, running the event the day of.”

Even though lots of work goes into planning Greek Week, Groves finds it rewarding.

“Greek week is one of the few times a year the whole Greek community really comes together,” Groves said. “This community is so powerful if we all come together towards one goal and I think CROP walk shows this.”

The sun shone down as students began their mile-long walk around Oxford over the weekend. Members chatted with one another while sipping water or coffee.

Sophomore Regan O’Brien, a member of Gamma Phi, was one of the walk’s many participants.

“It was a really great experience, bringing all the sororities and fraternities together for a really good cause and to get a little exercise on a Saturday morning,” O’Brien said.

“I thought it was very successful and a lot of fun,” Weckle said. “It was hot, but still fun and for a good cause.”

CROP walk is the final event of Greek Week, an entire week filled with events for Greek life members to participate in. From football to soccer, sororities and fraternities compete with one another to win the most challenges.

The more challenges a team wins, the more points they earn, and CROP walk is the last opportunity for points. Points are earned based on the number of members who show up and the number of cans donated.

Uptown was full of people before and after the walk, with lines out the door at both Starbucks and Fridge and Pantry. Workers hustled to complete orders and keep customers happy. With so many customers, there was a delay as people were waiting for their food. At Fridge and Pantry, they even gave out vouchers to customers who had been waiting.

Annika Backlund who works at Fridge and Pantry felt the rush of people as CROP walk ended.

“It’s usually not this busy early in the day,” Backlund said. “It [usually] gets busy around 1 p.m.,  but it’s been crazy. Everyone is in their sorority t-shirts so it’s easy to tell they came from CROP walk.”

As time passed, Uptown grew quiet as Greek members dispersed and traveled back home to get ready for the rest of the day. 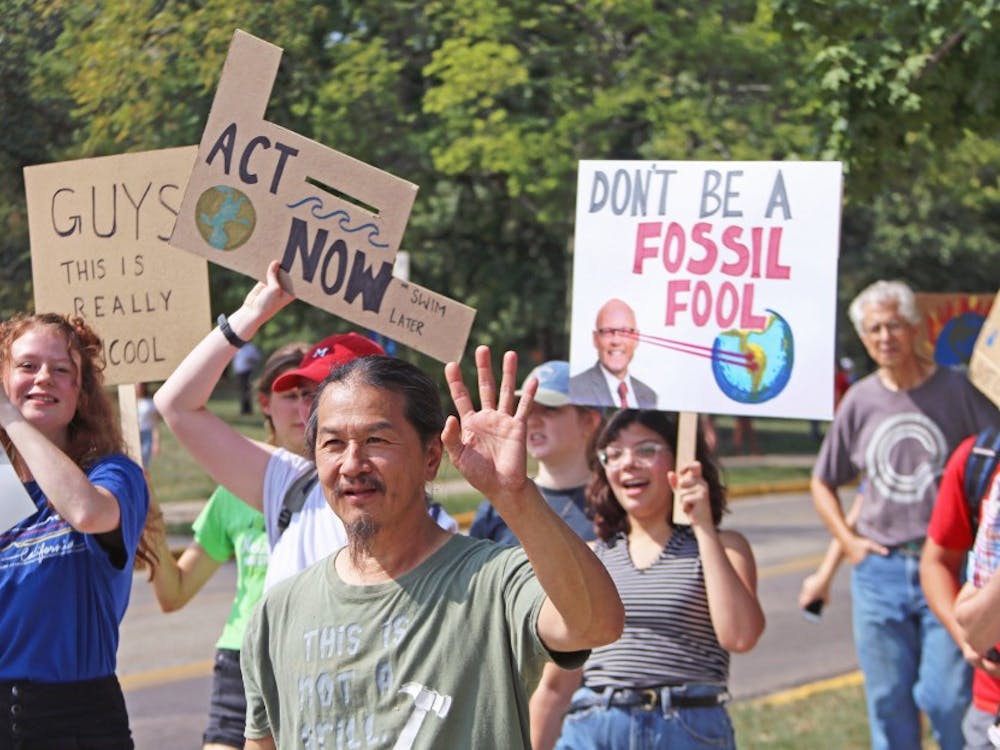