Facing a New Hampshire power play after junior forward Phil Knies was put in the penalty box, the RedHawks weathered multiple Wildcat shots on goal, but UNH junior forward Patrick Grasso buried a shot in the net six seconds before Knies was allowed to return.

The goal knotted the game at four in the third period.

Neither team jumped ahead during the rest of the period and overtime, as the contest ended in a 4-4 tie Saturday in the Steve ‘Coach’ Cady Arena at the Goggin Ice Center.

“Tonight, to me, felt totally different,” MU head coach Chris Bergeron said. “Unfortunately, the scoreboard [deficit] was something we’re not going to get used to, but that we’ve faced already in this early season. But I thought our guys were playing exactly the way we wanted to play.”

New Hampshire (1-0-1) won the opening faceoff, and play assumed a fast pace from the beginning. After quickly trading several possessions in the first two minutes, Miami (0-2-1) gained control and spent much of the next five minutes in its offensive zone.

Junior forward Ben Lown entered the penalty box for delay of game, giving the Wildcats a power play eight and a half minutes in. They seized the opportunity less than 30 seconds later, as sophomore forward Angus Crookshank scored the opening goal of the contest.

That flipped the momentum for the rest of the period.

Miami’s best chance to retaliate came right after the Wildcats’ goal. Sophomore forward Noah Jordan received a pass near the net and had only Robinson to beat, but a nice save by the UNH goaltender left the RedHawks scoreless.

It stayed that way for the rest of the period, as New Hampshire kept the 1-0 lead into the second.

Twenty seconds after Miami claimed the second-period faceoff, senior forward Karch Bachman had a one-on-one chance against Robinson, but his shot caromed off to the left of the net.

The Wildcats pushed their lead to 2-0 on a goal by junior forward Kohei Sato five minutes later.

After two RedHawks were sent to the penalty box within a minute of each other, New Hampshire capitalized on its 5-on-3 chance, adding a score by junior defenseman Max Gildon to go ahead 3-0.

Miami finally turned its high volume of offensive chances into points with a goal by freshman forward Chase Pletzke almost 14 minutes into the period.

For the game, Miami outshot the Wildcats, 32-25. It was the highest shot total of the season for Bergeron’s squad after tallying a combined 39 during the first two games.

Three minutes later, the RedHawks copied New Hampshire by scoring on the power play. Junior forward Casey Gilling sniped one past Robinson from 15 feet out, cutting his team’s deficit to 3-2 and hyping up a once-dead crowd.

Bergeron took a timeout with two minutes left in the period, and it worked. The RedHawks came storming off the bench, attempting to knot the contest at 3-3.

After a myriad of failed Miami chances, freshman forward John Sladic snuck in the tying goal — the first of his career — and created a whole new game with eight seconds remaining in the half. He was met by his high-fiving teammates at the bench when the period ended.

Sladic must’ve liked the feeling of scoring collegiate goals, because he did it again 90 seconds into the third period, putting the RedHawks up, 4-3.

“That felt good,” Sladic said. “But we didn’t get the result we wanted. Obviously, scoring my first couple goals is good, but we still didn’t get the win.”

Crookshank came within an inch of evening the game at four, when he rattled a shot off the left pipe five minutes in. The play was reviewed, but the original call of a missed attempt was upheld.

Kraws spent the next five minutes diving all over the ice, trying to preserve his team’s lead. He finished with 21 saves and played the entire game in his first career start.

Just after the halfway point of the period, sophomore defenseman Andrew Sinard was handed time in the penalty box. Despite New Hampshire being 2-for-3 on the power play to that point, Miami didn’t allow a shot on goal during the next two minutes.

Right after Sinard returned, Knies was called for hooking.

Miami held strong for nearly two minutes, but Grasso hit the equalizer six seconds before Knies was allowed back on the ice.

Neither team could break the knotted score, leading to the first extra hockey of the year for each team.

With 1:39 left in overtime, the RedHawks went on the power play. Bergeron quickly called a timeout.

“We were just trying to give those guys a rest,” Bergeron said. “We had some guys that had been out there a little bit, so we wanted to give [senior forward Gordie] Green a rest. But it was really just reaffirming what we had already talked about in terms of what to look for on their penalty kill and what we were trying to do on the power play.”

But Miami was unable to score, despite multiple looks on goal, finishing in a 4-4 tie.

The RedHawks stay at the Goggin Ice Arena next Friday and Saturday against Ferris State. Puck drop is scheduled for 7:05 p.m. Friday and 8 p.m. Saturday, and each game will air on NCHC.tv. 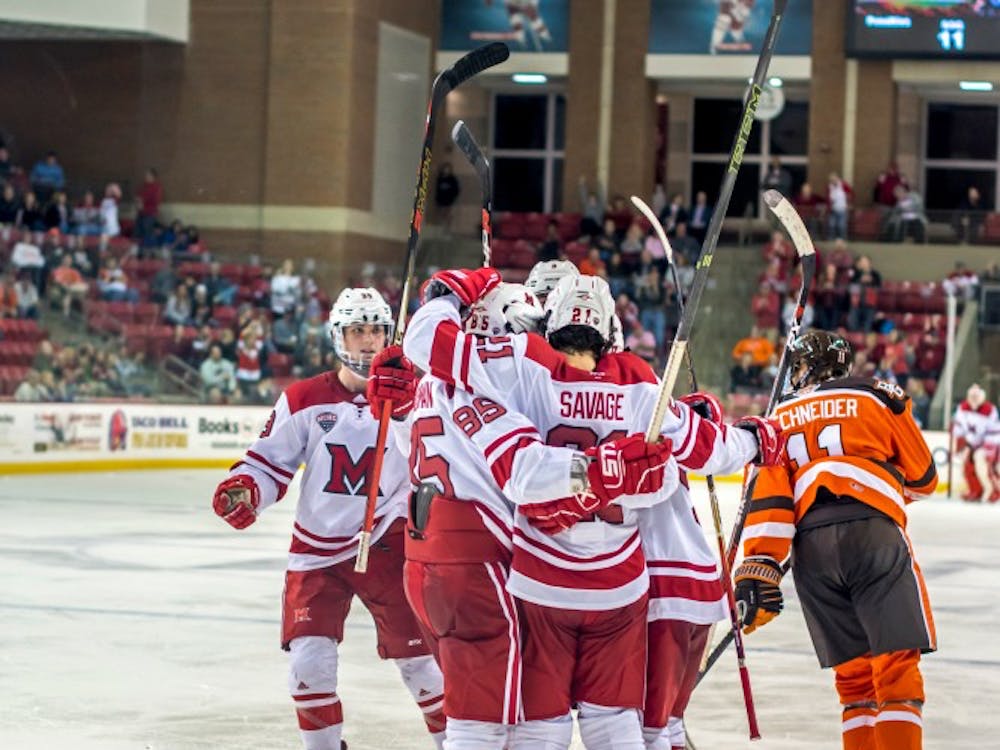