With a struggling start to a new coaching gig, Miami head coach Chris Bergeron looked to end his first homestand at the Steve “Coach” Cady Arena on a positive note.

The RedHawks’ first three games — a loss to Bowling Green and a loss and a tie to New Hampshire — were a brutal stretch where the penalty kill couldn’t stop anything. It was ugly enough to cause an in-game swap of netminder in the second game of the season.

But on Friday, Miami (1-2-1) turned a three-goal first period and a strong penalty kill into a victory against Ferris State (1-1) at the Goggin Ice Center, giving Bergeron his first win as the head coach of the RedHawks.

“I really liked our penalty kill. We won the special teams game for the first time in the four games we’ve played,” Bergeron said. “I know that winning feeling is a good thing. I’m glad to be in this role at this school.”

The fast start helped Miami control the majority of the game, even when surges of Bulldog offense looked to change the direction.

Senior goaltender Ryan Larkin got the nod in goal for the RedHawks after sitting for the weekend finale last week. He had allowed 11 goals in his past five periods of play.

Larkin shook off his rough start to the season and looked like he was playing for redemption, making 27 saves on 30 shots and earning his first win as a senior.

Though Larkin was busy early with three saves in the first four minutes, the RedHawks got on the board first with a wrist shot from junior forward Ben Lown (Daschke, Sladic).

Ferris State looked to swing the momentum with a few big hits from junior forward Liam MacDougall. Two early chances on the power play for the Bulldogs had a chance to be an equalizer, as the RedHawks had allowed at least two power play goals per game coming into Friday’s game.

Larkin led the way on the penalty kill with three huge saves, including a sprawling effort that took all 6’1” of the Miami goaltender to stop.

Miami’s third goal of the period was something to behold; senior left wing Karch Bachman charged into the offensive zone, only to be met by a bruising hit in the right circle from a Bulldog defenseman.

After being hit hard enough to lose his stick, the 2015 fifth round pick of the Florida Panthers sprang to his feet, grabbed his stick and lunged towards the loose puck in front of the crease.

The puck creeped past the goal line, and the siren blasted.

Supreme effort and perhaps being in the right place at the right time gave Miami a three-goal advantage after one.

Miami picked up right where it left off, getting off five shots in the first five minutes while simultaneously locking up the Bulldogs on defense.

Though the first Ferris State chance of the period did not come until the 5:15 mark, the Bulldogs continued to try to solve the riddle of Ryan Larkin.

Two more quick Ferris State shots in succession came with no avail. A third was met with a flash of leather from Larkin.

Physicality picked up after a big open ice hit on freshman forward Ryan Savage left him gingerly skating back to Miami bench. The hit from freshman defenseman Max Finner was assessed as game misconduct and sent the Bulldog forward to an early shower.

The five-minute penalty came and went without a Miami goal. Ferris State upped the pressure in the RedHawks’ zone, scoring two interrupted goals in less than a minute. The Ryan Larkin shutout was shut down at the 35-minute mark.

The RedHawks finally had the enemy momentum cease with a cross-checking penalty, having junior forward Coale Norris be the fourth Bulldog to visit the sin bin.

Fifty-one seconds passed after the penalty was handed down — enough time for senior captain and forward Gordie Green and junior Phil Knies to burst off in a two-man break.

Skating close enough together to tie the other’s skates, Green and Knies swapped the puck between their blades. The captain ended the game of hot potato, flipping in a quick shot before freshman goaltender Carter McPhail even knew what was going on. Green and the ’Hawks had reestablished a two-goal lead.

A hot shot from Bachman resumed the action in the final period, but the ’Hawks went shorthanded a minute into play.

Only one shot was thrown towards Larkin on the Bulldog powerplay, which was denied with a left pad.

Still, the Ferris State Bulldogs continued to throw the puck back into the Miami zone.

Sophomore defenseman Bray Crowder then smashed Ferris State’s freshman defenseman Jake Willets into the boards, creating a loud crash and a major penalty. Bray was ejected for a game misconduct penalty for checking Willets from behind.

In the confusion of Willets crippling behind the net, the Bulldogs scored again to shrink Miami’s lead back down to one.

The RedHawks’ penalty kill did a fashionable job during a five-minute shorthanded stretch that went on for what felt like an eternity. The cherry on top of Miami’s valiant showing was two shorthanded shots on goal.

Another penalty was washed away by Miami’s defense before a hooking call on junior forward Casey Gilling would put the struggling penalty kill in a bind in the last 90 seconds on play. Larkin stood tall as Ferris State pulled their goaltender to try to give Miami all it could handle.

Ferris State shot itself in the foot with a penalty and intentionally knocking the net loose, which gave Green a chance to seal the game with a penalty shot with 24 seconds on the clock.

Green’s miss only heightened the blood pressure of all 2,341 fans in attendance. Another 20 seconds of battling ensued before the 4-on-4 play was stopped due to an icing call on Miami.

Bergeron called timeout with a faceoff coming in his team’s own zone.

Monte Graham won the faceoff behind his own net, and Miami escaped with a narrow 4-3 victory.

The penalty kill was Miami’s ticket to win or lose the game. The six times the shorthanded RedHawks shut Ferris State down (including the five-minute major) kept pressure on the Bulldogs to beat the ’Hawks five on five.

Derek Darschke, who finished with a team-high three assists was happy with the win.

“Coach helped us stick with the process,” the sophomore defenseman said about the improvement on the penalty kill. “I think we went 100 percent.”

Miami will look to put another tally in the win column Saturday in a second game against Ferris State. Puck drop is at 8 p.m. at the Goggin Ice Center. 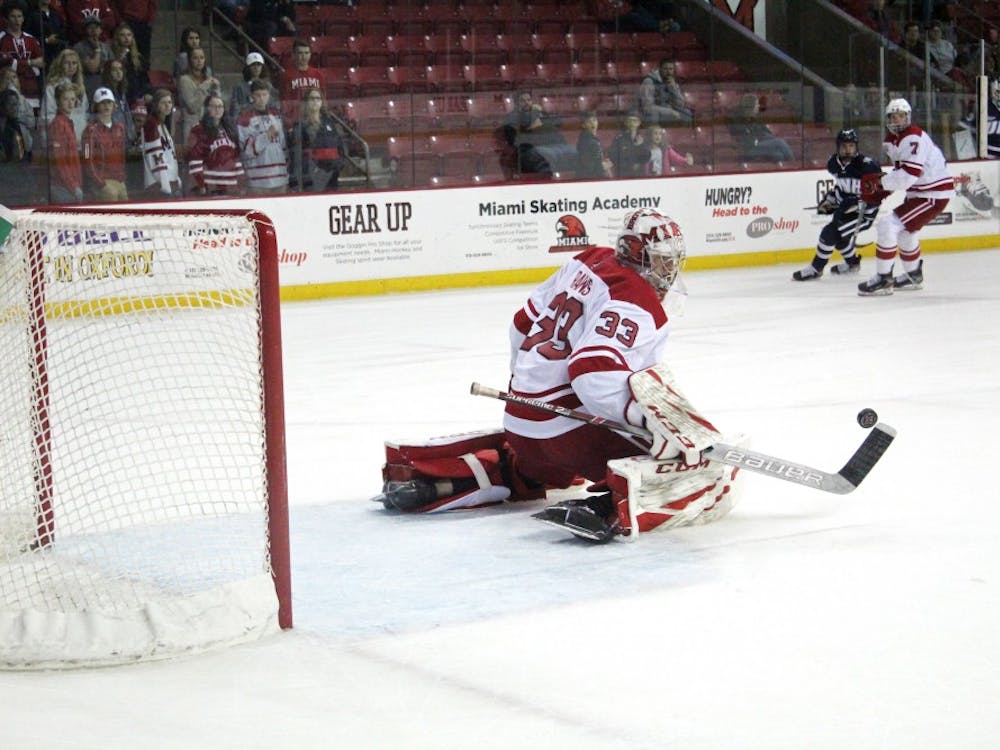 Andy Greene: ‘Not much has changed here.’

Fans of Miami University’s program knew Andy Greene was destined for greatness during his time here.