Striving for sustainability at Oxford EarthFest

Oxford hosted its annual Oxford Community EarthFest on Saturday, April 27 in honor of Earth Day. Over 25 organizations from Miami University, Oxford and the greater Butler County area attended to help spread the word about sustainability and protecting the environment.

Charles Ganelin, the president of the board of directors of Moon Co-Op, has attended EarthFest for a number of years and thought that this year had one of the largest turnouts he had witnessed. He credits this to people's increasing awareness of environmental issues and their willingness to make changes that can help preserve the environment.

From Moon Co-Op to Miami's EcoReps to the Oxford Environmental Commission, each of the groups that attended the fest focused on slightly different aspects of the environment and sustainability movement, but all united under the common goal to celebrate Earth Day and spread information about sustainability.

Chelsea Wallace, an outdoor pursuit coordinator at MetroParks of Butler County, went to the EarthFest to help spread the word about programming and events that are offered in Butler County parks. She thought the event was a good way to bring together like-minded people interested in the environment.

"You're bringing a bunch of organizations together that have the same goal in mind, to conserve, educate and show ways to help preserve and protect the environment," Wallace said. "It's a nice way to get that all-in-one spot for the groups that are out there to help the cause."

EarthFest featured a variety of activities for attendees, including live music and cornhole. Many organizations also offered hands-on activities and demonstrations at their individual tables. The Miami University Hammocking Club, for example, set up a flower planting station where EarthFest-goers could plant seeds inside of recycled bottles and cans.

Jordyn Garves, a junior zoology major, enjoyed running the Hammocking Club's table because it gave her a chance to interact with the Oxford community while promoting the club's message of sustainability and appreciation for nature.

Groups at EarthFest promoted sustainable practices like recycling and composting, as well as an overall movement towards a "Zero Waste" lifestyle, in which people reuse or repurpose all the products in their life in order to avoid producing trash.

However, most groups at EarthFest recognized that a jump to zero waste is a big step for the majority of people. Instead of pushing too much, Ganelin said, EarthFest t tried to promote as many small lifestyle changes as possible.

"It's always a gradual thing. How do you get the word out? Events like this promote it. Talking to friends, holding events, student organizations ... it slowly but surely gets the word out," Ganelin said. "Not everyone is going to get the ideal zero waste home, but if everyone does a little bit, you're contributing." 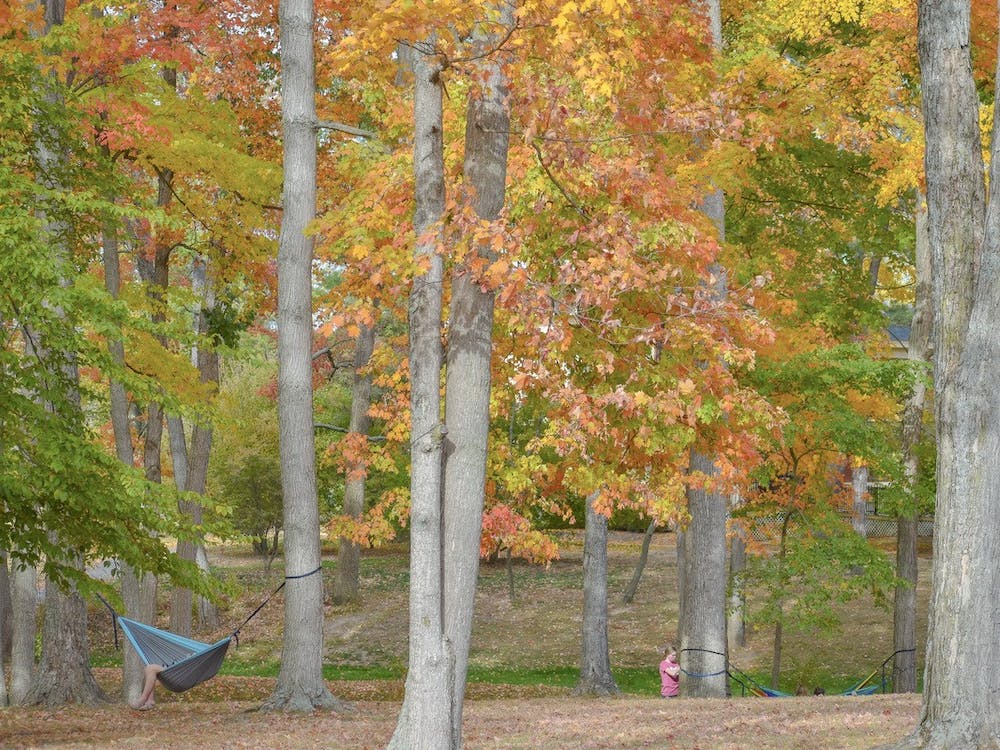 Through the pandemic and poor weather, Miami University’s Hammocking Club is persevering.  The club was founded by a group of friends back in 2017, and although they’ve all since graduated, current club members have kept their community alive.