'Tell the story': Refusing to repeat the past at Oxford's NAACP Freedom Fund banquet

Mayor Kate Rousmaniere opened the annual NAACP Annual Freedom Fund Banquet with her proclamation, recognizing this year's event with the theme of "Steadfast and Immovable. "

"Attendees of the banquet represent all walks of life in the greater Oxford community," she said, reading from one of the bright yellow packets placed at each table setting. "And I urge all citizens of all ethnic groups to support this event."

Fran Jackson, NAACP president, then led those gathered in a rendition of, "Lift Every Voice and Sing."

Barbara Cox, NAACP's vice president and co-chair of the banquet, said, "We have modified the language [of the scholarship criteria] to be more inclusive of all students of color."

In May, the NAACP will be awarding full scholarships to one Asian-American, one Hispanic and one African-American.

Several community members were also recognized at the banquet for their support of the NAACP's mission.

Linda Musmeci-Kimball, the other co-chair of the banquet, presented the Special Service Award to Talawanda superintendent Kelly Spivey, who has worked in the district for over 30 years.

Following the awards, The David Palmer Trio performed Herbie Hancock's piece "I Have a Dream."

The trio was comprised of Ralph Jones on guitar, Ian Borg on the drums and David Palmer on the keyboard.

"I love the ambiance here tonight," Palmer said. "This piece was inspired by Dr. King and is a social statement written in music."

And while the banquet's keynote speaker, Tammy Kernodle, is a professor of musicology at Miami, she emphasized her speech on what we can do to affect change, rather than by lecturing about the historical implications of jazz.

"I'm humbled to be here," she added. "But I'm here tonight to remind you that there is still work to be done.

Calling upon the spirits of the brave black American women before her time, such as Harriet Tubman and Ida B. Wells, Kernodle made note of 50th anniversary of Martin Luther King Jr.'s assassination and how his words and works have been sanitized since his death.

Kernodle stressed how it important it was to make sure King's dedication to civil rights will not continue to soften with the passage of time.

"I know the chicken and the chocolate and the wine are going to start kicking in at any moment," she said to a chorus of laughter. "And, soon I will sound like the 'Peanuts,' but I ask you as a room full of multi-generations and multi-experiences, which represents the beauty of Americans, to tell the story."

Kernodle said when people don't tell stories, history is doomed to repeat itself.

"If we had told the history -- the good and the bad -- it means that when we first heard the words 'America First' over 365 days ago, we would have remembered those words were first spoken as propaganda from the KKK," she said. "If we had told the story then we would've learned from the narratives."

Kernodle spoke highly of the stories passed down to her as a girl by her maternal grandmother, who was the 12th child of former slaves, born to a woman who valued education as a result of learning how to read and write from the white daughter of farmer next door.

"My grandmother continued to learn and develop from the lessons her mama taught her," she said. "She went to night school and got her degree in nursing while working in the textile mill in her 50's.

"All we have are our collective stories. And we need to tell these stories to empower the young people that look up to us."

Before closing with a quote from Saint Paul, Kernodle assured the audience that, while religion can often be problematic, the lessons that Paul learned about the culture of discrimination remain as true today as they were thousands of years ago.

"Paul wrote a letter to the Galatians, greatly dismissed because people within the church were too busy fighting over among themselves over who had the power they forgot about the community they were supposed to be serving," Kernodle said. "He wrote to them, 'do not grow weary in your well doing. For in due season it will come to pass.'"

When Kernodle took her seat, everyone in the Heritage Room rose to their feet -- all clapping, some teary-eyed.

Everyone clasped hands as Paula Smith led the room in a performance of "We Shall Overcome."

Black and white hands held tightly to one another, singing the lyrics of the Gospel hymn first written over 100 years ago.

And, Kernodle's words echoed throughout the room.

"Be immovable. Be steadfast. Be loving. Just be."

By Julia Arwine | 3 days ago

Tyler Perino stood between his parents, Randy and Laura, while facing the judge in the Oxford Courthouse. A few rows behind him sat several former members of the Delta Tau Delta (Delts) fraternity, and just a few feet to his right stood another: Joshua Plaster, who had just pled guilty to hazing him.  Nine of the 18 former Delts charged in October pled guilty to hazing and received their sentences in court on Tuesday, Feb. 25, which mostly consist of fines.

By Julia Arwine | 3 days ago 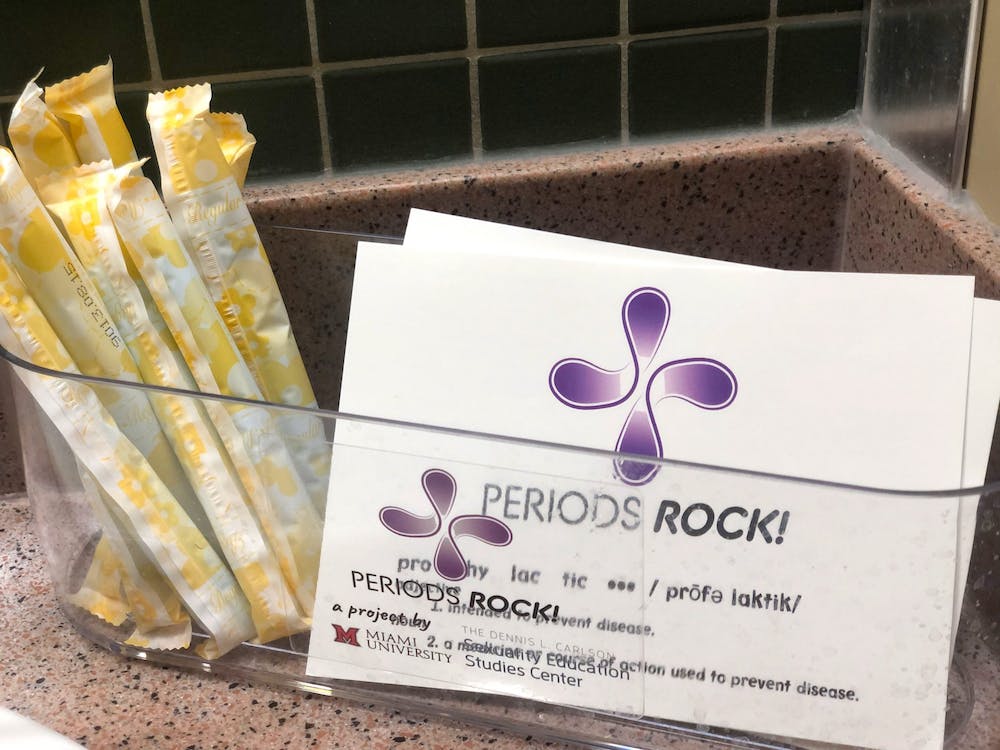 By Meghna Santra | 3 days ago

For menstruating students, it can be a nasty surprise to be left with none of the needed supplies when an unforeseen period strikes. However, thanks to Periods Rock!, such surprises may be on their way toward becoming obsolete.