Following last Monday's occupation of the Armstrong Student Center, black students and their allies at Miami University doubled their efforts to raise awareness about the lack of diversity and inclusion on campus.

BAM 2.0 protested in the Farmer School of Business (FSB) on Tuesday, staged a sit-in at Roudebush Hall on Wednesday and held a second demonstration in Armstrong on Thursday.

Their activism was prompted by a screenshot in a Twitter post that went viral over spring break, depicting first-year Thomas Wright bragging in a Tinder exchange about his use of a racial slur in a GroupMe message last November.

However, these students are speaking up for issues much larger than Wright and have formed the Black Action Movement 2.o to further combat racial unrest at Miami.

During Tuesday's protest at FSB, students argued that the companies who financially support FSB, such as KPMG and Ernst & Young, are supporting a school that stands for racism.

A little over a dozen students stood stood outside FSB 1022, the Student Services office, from about 2:30 to 2:50, holding signs, chanting and recording videos and taking photos to post on social media.

Their message was focused on needing their fellow students to speak up, reflected in the chant: "White silence equals violence."

"If you're standing on the sidelines, there is no sideline," junior Miranda Woods said. "There's no gray area here. You're either for us or you're against us. You either call your friends out when they make these statements and say these things or you just continue to feed into the racist culture that [Miami] is."

ASG President Maggie Callahan and Secretary for Diversity and Inclusion Courtney Rose were also present at the protest and later sent out a letter to the Miami student body, condemning students' use of hurtful, racist language.

"Regardless of whether you 'mean it' or not, words carry a lot of weight," Callahan, Rose and ASG Vice President Luke Elfreich wrote in the letter. "Saying that it was 'just a joke' is not an excuse for using hurtful or disrespectful language. Ever."

The next day, around 15 students piled around the couches and sat on the second floor of Miami's administrative building, Roudebush Hall.

A sign reading "What Love What Honor? #blacklivesmatter" faced the staircase, greeting anyone who approached the second floor.

President Greg Crawford addressed the students while handing out a platter of cookies and a case of water bottles.

"I am on a journey to transform Miami," Crawford said. "I stand with you and am in 100 percent support of what you do."

One student chuckled to himself while another whispered an audible expletive as Crawford turned his back to face another student.

Rodney Coates, professor and coordinator of Black World Studies, also spoke to the students in Roudebush. After Wright's initial message went viral in November, Crawford established the 2017 Presidential Task Force on Inclusion and Diversity with Coates at the head. Coates asked the students for their help in continuing the work.

"I need to hear from you guys," Coates said. "You all have to help me to make recommendations to transform this place...If you want to talk about the culture of this institution, it has to be in terms of diversity and inclusion."

Coates encouraged students to come to his class on Tuesdays and Thursdays from 2:30-4:10 p.m. this semester to contribute toward his overall research.

"What you're doing is extremely important," Coates added. "What we need to do is ensure that it's not just a moment, but this becomes a movement and a process."

Coates also praised Crawford's intentions, calling him the first president he had seen in his 28 years at Miami who is "actively trying to make this a more inclusive place."

For some students, though, Crawford and Coates' statements are not enough.

Coates declined to speak on the behalf of his colleague.

"Dr. Coates was saying he's here to work with us," Holley said. "But what he did not say was 'Miami University is doing something about this.' I know we have allies, but this isn't about personal allyship at this point. It's beyond that. We need institutional allyship."

Crawford tweeted a statement to the Miami community after the original protest in Armstrong on Monday, March 26, saying, "Once again we are facing words and symbols of hate and intolerance, directed against members of our own community."

Many people thought his words were vague, and Holley looks forward to seeing a clearer response that can inform the students, faculty and staff about what's going on at Miami's campus.

And, as far as future protests and demonstrations go, the Miami community should be prepared for more.

BAM 2.0 followed up Wednesday's sit-in by holding a second, but smaller, protest in Armstrong on Thursday.

"The administration needs to do something about everything that is going on, especially because we pay to be here," junior Imani Steele said.

A group of 20 students sat on and around the Seal in Armstrong with signs that read "Do black lives even matter to Miami?" and "Black dollars matter, but black lives don't matter to the university."

BAM 2.0 wanted to make it clear to the university that they will continue to speak up and make noise unless the racial climate on Miami's campus changes, Steele said.

A list of demands from BAM 2.0 will be released on Tuesday, April 3 through the Diversity Affairs Council listserv and various student organizations' listservs as well as on the BAM 2.0 Facebook page and their Twitter account @BAM_98_.

"The Black Action Movement has regenerated in order to: address discriminatory incidents on campus; demand the restructuring of institutional policies and initiatives; and enlighten others of Black students' ordeals to usher an inclusive Miami University community." 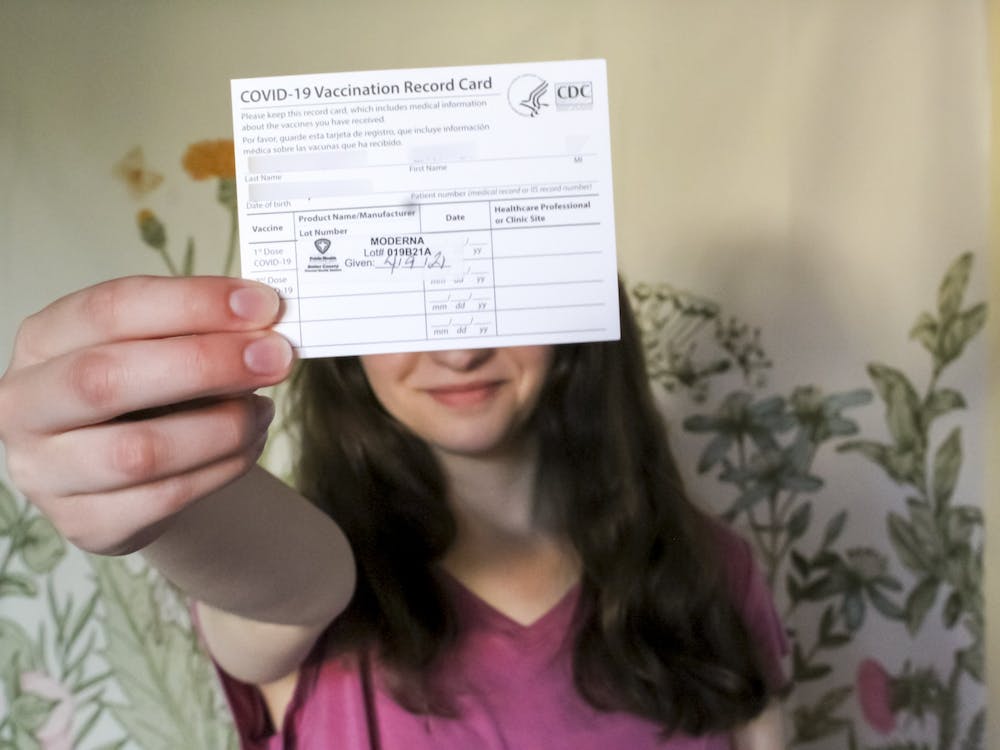 Staff and Students discuss the merits of vaccine cards

People who get the COVID-19 vaccine are urged to hold onto their vaccination cards, although the uses of the card for anything other than record keeping and verification for the second dose of the vaccine are unclear.