Mac Bites vs. Mac Bites: This town is big enough for the both of them

High Street in Uptown Oxford houses a wide variety of eating establishments. Chain restaurants like Skyline Chili and Subway share the same bit of road as the local businesses and holes-in-the-wall like Steinkeller and Bruno's Pizza.

Two of these eateries, Skipper's Pub and Mac and Joe's, exist at opposite ends of one of the mildest debates to grace the brick street. The question is: Who serves the better mac and cheese bites?

The thing is, they're the same.

Both get their mac and cheese bites from Fred's for Starters, a food service that offers several frozen appetizers to its partnered businesses. Fred's provides a plethora of starters including fried pickles, mozzarella sticks, onion rings and, of course, mac and cheese bites.

The differences that do exist are subtle. Skipper's fries its bites in 350-degree vegetable oil and serves them with chipotle ranch for dipping, while Mac and Joe's uses soybean oil at 350 degrees and a side of aioli, essentially a spicy mayonnaise.

Mac and Joe's has a long history as an Oxford eatery. John McFall and Joe Beinford, two Oxford natives, opened their doors in 1946, becoming one of the first bars in Oxford post-Prohibition.

Seventy-one years later, it hasn't strayed from its classic layout. Dark wooden booths line the upstairs and downstairs walls, enclosing additional tables in the center. The bars in either space stand out, with each taking up nearly the entire length of a wall.

Todd Hollenbaugh, the owner of Essenza Corp, which oversees Mac and Joe's, has strived to preserve the environment in his 25 years of ownership.

"I wanted to keep the same layout for alumni," Hollenbaugh said in an interview with Project Oxford in the mid-2000s. "When they come back to visit, this touchstone from their past is still the same."

Hollenbaugh's journey to ownership started in 1972, when he became a bartender at Mac and Joe's. He eventually moved up to manager and stayed to run the restaurant after he graduated from Miami.

Mac and Joe's fired him in 1975, which led him to work with the then-illegitimate business known as SDS, for Student Delivery Service. Forty-two years later, Hollenbaugh's company owns Steinkeller and Circle Bar, in addition to Mac and Joe's.

"I've actually talked about this with people before," said Emma Scheidt, a server at Mac and Joe's. "I like ours better. I feel like they're crispier on the outside, and I feel like the sauce is better here too."

Skipper's, while lacking the tenure of Mac and Joe's, has its own history. Terry and Andrew Amarantos, hailing from Chicago, opened Skipper's Pub in 1984 for Miami's Little Sibs Weekend (now Family Weekend). They named the restaurant after their father's hot dog stand back home, Skipper's Red Hots.

Originally the site of a textbook store and a Dairy Queen, Skipper's started in the downstairs pub space, eventually growing and adding the bar, Top Deck, to the upstairs space.

"We brought Chicago with us with things like our Italian sausage, beef, giardiniera peppers and the gyros," Andrew said. "We're very hands-on guys, big believers in staff. Our staff is the cream of the crop. Without a good staff, you've got nothing."

Customers at Skipper's get an order of eight mac and cheese bites for $4.69.

"I think it has to do with the oil we fry them in," said Courtney Kasper, a Skipper's employee loyal to her establishment's bites. "Ours are also cheaper than Mac and Joe's."

Despite their bites being cut from the same cloth, Mac and Joe's and Skipper's mac bites will likely endure many more years of debate, with the soybean and vegetable oils creating enough of a difference to fuel the fire.

Andrew Amarantos believes that both establishments will continue to find success in the face of the burning question.

"They're just so different," Andrew said. "Nobody's coming in here for a sit-down kind of meal, just like nobody's going over to Mac's at 2 a.m. The two are just fundamentally different." 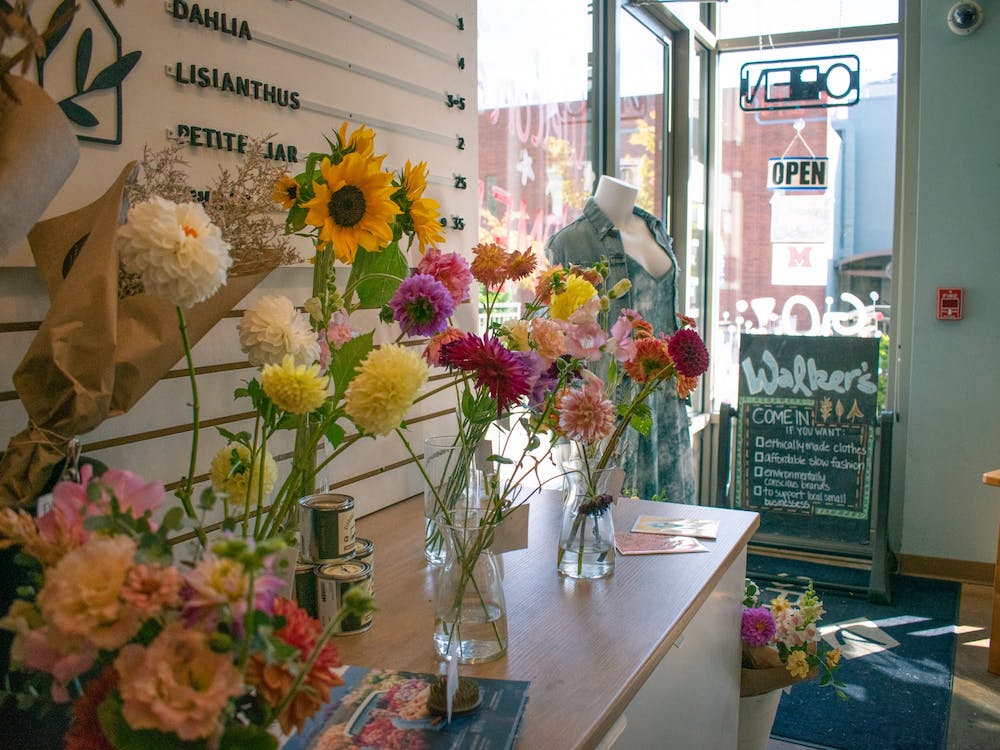 The Bloom Bar inside Walker’s also features prearranged bouquets and “everlasting” bouquets, which are dried up greens that can be featured far longer than regular flowers.