After stepping in for injured starting quarterback Brett Gabbert, Aveon Smith has been a steadying hand for the Redhawks.

After a spectacular end to the 2021 season for Gabbert, expectations were high for the 2022 Redhawks. Gabbert’s injury was a major setback for the team, but thankfully, Miami University had its insurance policy within the quarterback room.

Despite the uncertainty surrounding the position, the team has rallied behind its new quarterback. Smith, the redshirt freshman from Lexington, South Carolina has had an interesting journey to his first career start at Miami.

As a team captain at White Knoll High School in Lexington, Smith was an electric playmaker that could get it done with his arm and his legs. His junior year, he threw for 1,343 yards and 14 touchdowns along with 1,000 yards and another 14 scores on the ground. Despite all of his success during his junior season, Smith struggled to find offers from Division I programs.

“In high school there weren't a lot of us that went Division I so it was a grind for sure,” Smith said. “I had to go to a lot of camps and I reached out to a lot of coaches my sophomore and junior year.”

He followed those junior year totals up with a similarly spectacular senior season.

In just five games, Smith tallied 27 total touchdowns and once again demonstrated his dual-threat ability. In that fifth game however, Smith suffered a torn ACL that would end his season.

“That set me back for a little bit,” Smith said. “I had to go to therapy and I had to do a lot of different things to get ready for the college level. But that was just a minor setback.”

As Smith sat at home recovering from his injury, he turned his attention towards where he would be playing his college ball. After considering his options, Smith decided to take his talents to Oxford, Ohio.

“I just liked the academics,” Smith said. “The fact that I could enroll early and start early was one of the big reasons.”

For his first two seasons Smith was forced to ride the bench. While it wasn’t the ideal situation for a competitive guy like Smith, he took it in stride.

“It was a love-hate experience because you know, I wanted to play but at the same time I had some learning to do,” he said. “My leg wasn’t 100% speed-wise, so it was a good learning experience being behind AJ [Mayer] and Brett [Gabbert].”

Fast forward to the 2022 season and Smith finally got his call to action. Already down 37-13 to Kentucky in the fourth quarter, Smith was able to get his feet wet for playing against SEC competition after an injury to the starting quarterback Gabbert.

“You just stay ready so you don’t have to be ready,” he said. “...When the time came I just had to be mentally prepared.”

After being thrown into the fire against current No. 7 Kentucky, the Redhawks shifted gears to face Robert Morris of the FCS in week two.

In his first career start, Smith took care of business. He threw for 155 yards with a 14/22 completion rate. He added 38 more yards on the ground and threw for three touchdowns. Two of those went to senior receiver Mac Hippenhammer.

“[From that Robert Morris game] I learned to be decisive,” Smith said. “...When I’m in that moment, just do what I feel like is best for the team.”

Head Coach Chuck Martin was asked in a recent press conference about what he told Aveon following his first career win as a starter.

He told reporters he asked Aveon if he was sore. When Aveon told him he wasn’t feeling sore Martin told him, “Well you’re gonna be sore next Saturday!”

Facing a tough Bearcat squad the following Saturday, Aveon and the Redhawks got out to a fast start. An early 17-7 lead quickly evaporated however, after Cincinnati found its footing and held Miami scoreless in the second half, on their way to a 38-17 victory.

The resilient Smith used that game as a lesson for how to play non-conference opponents. Despite only completing 7 passes, Aveon came alive late in Miami’s next game against Northwestern.

With the game tied and about six minutes to go, Aveon and the Redhawks methodically marched down the field, making consistent gains and chewing clock. With 21 seconds remaining Graham Nicholson made a 36 yard field goal to seal the 17-14 victory, Miami’s first against the Big Ten since 2003, when future hall-of-famer Ben Roethlisberger was under center.

Martin’s first win against a Big Ten opponent did not come via his first-team All-Mac quarterback Brett Gabbert. Instead, the dynamic Smith, who has had to prove doubters wrong his entire career, made a statement on Saturday night.

It wasn’t the way Martin and Redhawk fans envisioned the start of the season to go, but Aveon Smith has provided a spark when Miami needed it more than ever. 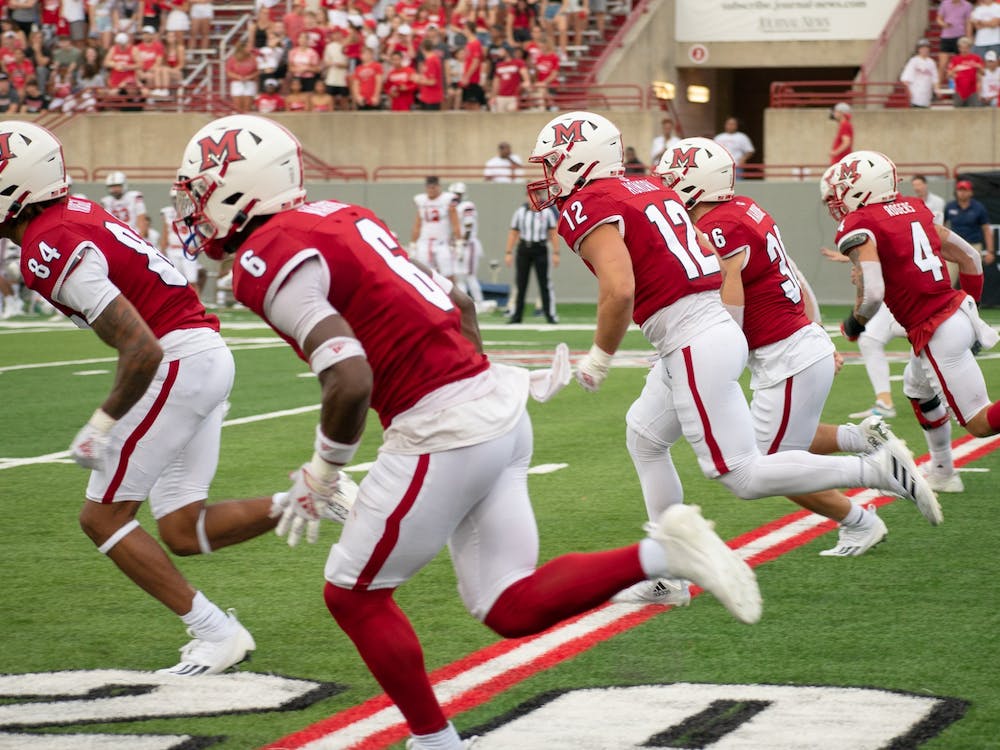