Cameron Tiefenthaler, a Wilks Fellow and sophomore at Miami University, is casting her first overseas ballot this spring while she spends her semester studying abroad in Luxembourg.

Many Ohioans will also experience voting firsts this year as Ohio will split its primaries between May 3 and another not yet agreed upon date.

At the start of February, Tiefenthaler requested an overseas ballot and received a confirmation email that she would be sent a ballot.

About three weeks ago, however, Tiefenthaler received a new email from her Board of Elections. Because the Ohio Redistricting Commission’s third set of district maps had been struck down by the state Supreme Court, the Board wouldn’t be able to mail her a ballot in time for her vote to be counted.

Alternatively, the Board of Elections asked if Tiefenthaler would be able to print off a ballot to fill out, and mail back. She emailed back yes and was sent a PDF.

The email Tiefenthaler received included a disclaimer regarding the elections which had maps still in the making. The email read:  “The State Central Committee candidates are not on this ballot, more than likely an August 2 election will be held for this election and state representative candidates. Don't hesitate to get a hold of us if you have any questions.”

From here, Tiefenthaler still faced some challenges mailing her ballot.

“The only tricky thing was that they also emailed me the PDF version of the content that was being printed on the envelopes. I was a little confused as to if I was supposed to print out those sheets to tape them to envelopes and then put that inside of another envelope,” Tiefenthaler said. “I emailed asking for clarification on the envelopes and didn't hear back, so that's what I did.”

“It's been a little bit of a mess,” Tiefenthaler said. “Especially with the Board of Elections and trying to coordinate the overseas ballots and making sure you can still vote in the elections that are going to be running on May 3.”

The situation Tiefenthaler referred to as the “current districts kerfuffle,” has yet to be resolved as potential district maps were rejected a fourth time on April 4, and disagreement about what constitutes an acceptable map continues.

The showdown is between the Ohio Supreme Court and Ohio Redistricting Commission, both of which have conservative majorities. Republican Chief Justice Maureen O’Connor has sided with the court’s three Democrats in rejecting the proposed maps for heavily favoring the Republican party.

While congressional and local office primaries will still occur on May 3, the exact date of House and Senate primaries hasn’t been decided. In order for the primaries to not conflict with general elections, they need to be held by August 2, which has also caused confusion.

A large part of Kelley’s role is providing information about elections and civic engagement. Every day she checks for updates on Ohio’s districts to pass along that information to Miami.

“We worry about confusion — people might think the primary isn't happening at all, so people don't show up, and then if they move the primary or hold a special election, people not showing up to that,” Kelley said. “It's fewer people getting a say in who is going to represent them.”

“For a lot of these districts, the general area, it's not going to change too much, but in areas where it might be a competitive race, every vote can matter,” said Anne Whitesell, a Miami professor of political science. “And being able to say ‘I definitely know this neighborhood is going to be in my district or not,’ that could make a difference.”

As a result of gerrymandering for the past decade, Ohio has had a disproportionate Republican dominance in Ohio’s U.S. House delegation, Whitesell said.

“We've been represented in the U.S. House by 12 Republicans and four Democrats for the past 10 years,” Whitesell said. “Even though our state is not 75/25 Republican versus Democrat.”

Gerrymandering isn’t unique to just Republicans; it is also used by Democrats to gain advantages. In her home state of Maryland, Whitesell said, gerrymandering favors Democrats.

In 2015, an amendment was added to the Ohio Constitution to make redistricting less partisan. Whitesell said the reform requires the breakdown of districts to mirror the overall composition of Ohioans.

Currently, Oxford is in District 8 and shares boundaries with three other districts. Republican Warren Davidson has represented District 8 in Congress since 2016 and is running unopposed.

“The outcome of the election is essentially predetermined,” Whitesell said. “Because if you're running in a district that is solidly Republican, and you're a Democrat, you basically know you're going to lose. It’s not good for democracy, for people to be that disengaged.”

John Forren, director of Miami’s Menard Family Center for Democracy, said people who vote in primaries tend to hold more extreme political views that are not representative of Ohio as a whole.

“Who's likely to show up in a Republican primary? Likely someone more conservative than the average Republican. The Democrats who show up in the Democratic primary tend to be more liberal, and also more ideologically committed,” Forren said. “The party activists are the ones who control the primary process which tends to then lead ordinary voters to disengagement.”

Roughly two-thirds of Ohioans in a typical year have little to no direct contact with the government, Forren said. This includes attending public meetings, emailing city council with concerns or posting political views on the internet.

Younger Ohioians tend to be less engaged than older generations, Forren said. Those in the 18-to-25 year old age group tend to vote less than other age groups and this holds true in Ohio.

“Habits of civic engagement develop early in life, so if you are civically engaged in high school or in college you tend to stay engaged throughout your life,” Forren said. “If you're not engaged early on, you are likely never to get engaged.”

District 8 is not generally understood to be competitive, Forren said. Because of this, Miami students can become discouraged from voting.

“With the sophistication of the software packages that are used to draw the district lines, we really are in a situation where politicians can choose their voters rather than the other way around,” Forren said.

For Miami students in the military or studying abroad, voting is also a discouraging process.

“Even notwithstanding the current districts kerfuffle, it's a challenge to be an overseas voter,” Tiefenthaler said. “The hoops you have to jump through to request the ballot, to have access to a printer, to figure out international postage and to plan things out months ahead. That's assuming your ballot will even be received in time and you'll follow all the instructions correctly. But I'm not going to let distance prohibit my voice from being heard.” 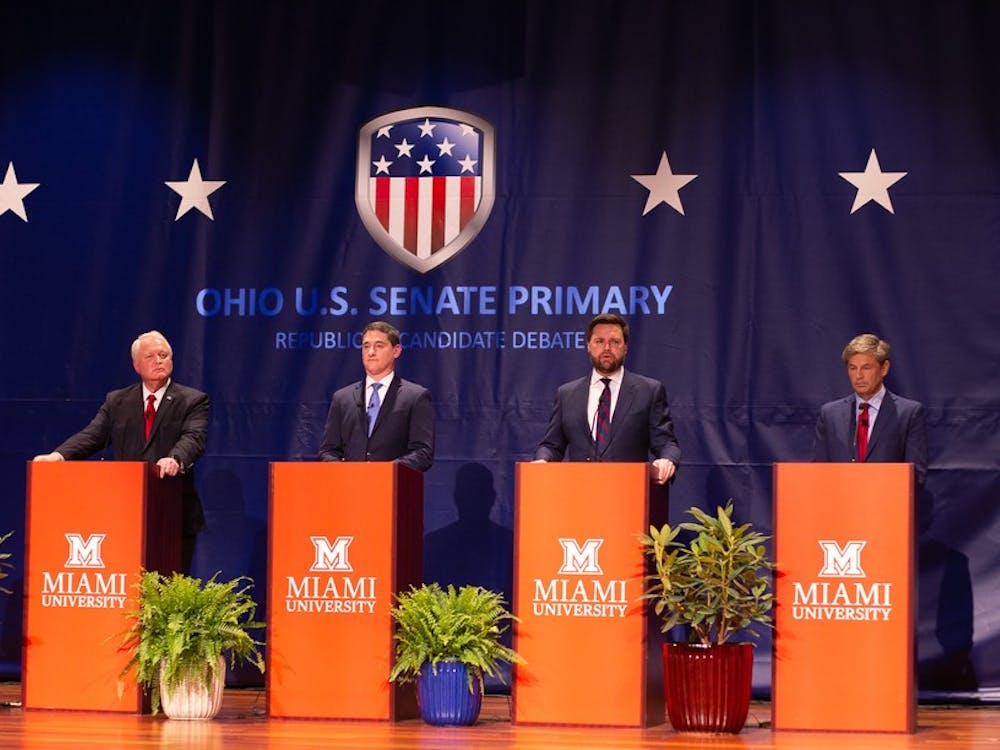 The candidates took to the stage to tackle a range of topics including Ukraine, crime and Critical Race Theory. 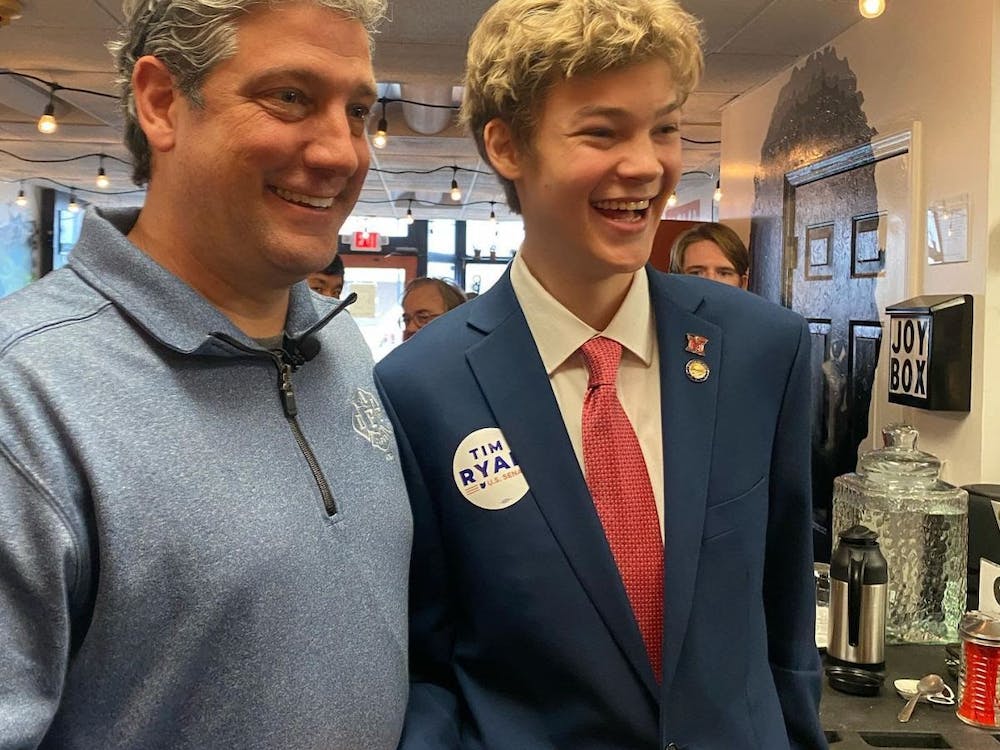 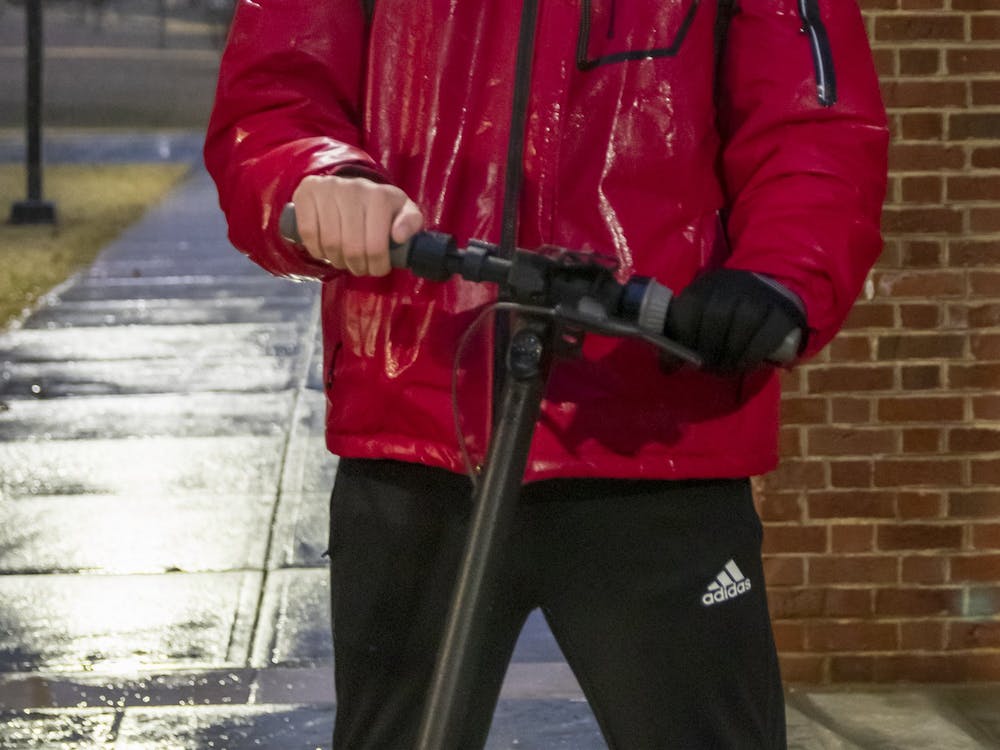