The ’Hawks swept the series, winning all four games and only giving up two runs the whole weekend.

Miami ran away with a 15-0 win on Friday night.

The RedHawks found their groove in the second inning. After a scoreless first inning, the first run of the game came when senior outfielder Lily Wilmot hit a ground ball to centerfield for a single to send senior outfielder Jada Dotson home.

Freshman infielder Holly Blaska stepped up to the plate and hit a double to bring home Wilmot and senior infielder Mackenzie Moore, making the score 3-0.

The last score of the inning came when freshman outfielder Karlee Juarez hit a single and sent Blaska across the plate. The ’Hawks were up 4-0 at the end of the second inning.

Senior pitcher Courtney Vierstra struck out all three Broncos that stepped up to the plate in the top of the third inning.

In the bottom of the third, Blaska hit a single for Dotson to score and extend the RedHawk lead to 5-0.

Western Michigan put two runners on base in the fourth inning but were unable to put up a score.

A double-play ended the game, as Moore caught a fly ball at third and threw to Blaska at first to get the runner out.

The teams met back up on the field on Saturday for a double header.

In the first game, senior Mackenzie Swinehart of Western Michigan hit a home run on the first at-bat of the contest.

The RedHawks answered in the bottom of the first when Moore was walked with the bases loaded to send Juarez home.

In the second inning, Vierstra struck out the first three batters that stepped up to the plate.

The ’Hawks scored five more runs in the third inning, including a home run from Cummins that put her and Kobayashi across the plate.

The only score in the fourth inning came from a home run by Dotson.

Freshman Taylor Turner came in to pitch for the RedHawks in the fifth inning, allowing no hits and two strikeouts for a Miami win, 10-1.

Junior Brianna Pratt pitched for the ’Hawks for the second game of the day.

Dotson hit a single and sent Kobayashi and Cummins home for the first score of the game, putting Miami up 2-0 at the bottom of the first.

Cummins and Kobayashi each got an RBI in the second inning, extending the lead to 4-0.

The Broncos scored one run in the top of the fourth, which Spaid answered with a home run in the bottom of the inning.

No runs were scored in the last three innings, leaving the RedHawks on top with a 5-1 win.

Miami came back on Sunday ready to fight.

The first score came from a Cummins double that sent Kobayashi home. A single from Dotson and a run from Cummins put the ’Hawks up 2-0 at the end of the first inning.

Two more runs from Spaid and junior catcher Riley Coyne extended the lead to 4-0 after the second.

The third inning was scoreless for both teams.

The RedHawks had a huge inning in the fourth, scoring 6 runs, four of which came from an out of the park grand slam from Barlow, putting them up 10-0.

Senior Taylor Rathe pitched the fifth inning for the ’Hawks, allowing no hits.

The wins this weekend raised Miami’s record to 4-0 in the MAC and 11-6 overall.

The RedHawks will continue their season at 7 p.m. on Wednesday at the University of Dayton. 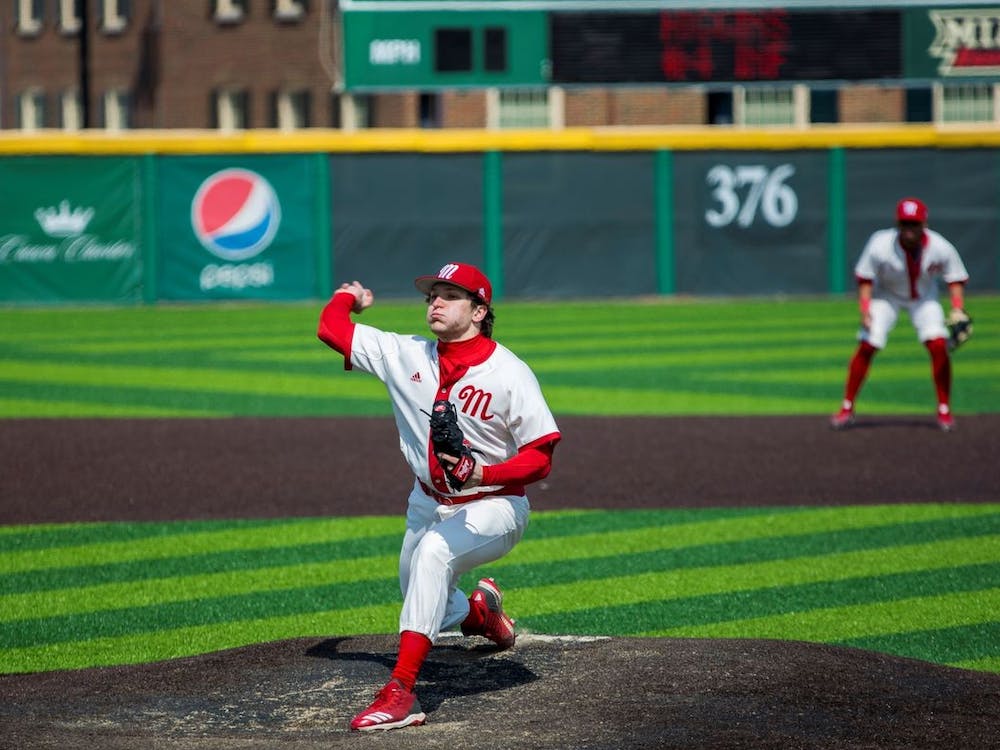