“I was more nervous for this game than any game,” Martin said in his victory press conference.

It was the first Miami football game in almost 10 months. Yager Stadium was empty, besides the athletes’ families and friends who were allowed to attend the game.

“Starting off, it was so weird,” Martin said.

After the teams traded punts to start the game, Ball State struck first with an eight-play, 90-yard touchdown drive. The Cardinals punched it into the end zone with an 11-yard run from senior wide receiver Justin Hall.

Miami’s offense was methodical the next drive, with five straight runs before sophomore quarterback Brett Gabbert hooked up with redshirt senior receiver Jack Sorenson to put the ball inside the 10-yard line.

Then came the first bad break of the game for the RedHawks.

Redshirt freshman running back Ontario Russell, getting the first live action of his career, fumbled inside the 5-yard line. Redshirt sophomore defensive lineman Emeke Jillani picked up the fumble and returned it to the 29.

The next bad break came on Miami’s next drive. Facing a third and long on Ball State’s 43-yard line, Gabbert attempted to pick up the first down with his legs.

The Cardinals’ defense had other ideas, as Gabbert was sandwiched by senior free safety Bryce Cosby and linebacker Brandon Martin short of the marker. After a review, Cosby was ejected from the game for targeting.

After staying down on the turf for a few minutes, Gabbert exited the game and later walked off the field into the locker room. Martin said Gabbert looked OK at halftime, but his timetable to return is uncertain.

It didn’t take long for Ball State to respond.

Facing a third and four on its own 34-yard line, redshirt senior quarterback Drew Plitt connected with Hall at midfield and watched as his receiver ran down the sideline for his second score of the game.

With less than three minutes left in the first half, Mayer came out firing, completing the first pass of his career to redshirt junior tight end Adam Mehelic.

Redshirt junior running back Davion Johnson gashed the defense with two straight big runs to set the RedHawks up in the red zone.

After a Ball State sack on third down, Miami settled for a field goal to cut the deficit to 14-10 before halftime.

The Cardinals received the ball to start the second half. After a mix of runs and passes, senior running back Caleb Huntley busted a 45-yard run to put Ball State up 21-10.

Ball State seemingly had the momentum on its side.

Mayer completed a dart over the middle to Sorenson for a pickup of 33 yards to start the drive. A few plays later, facing a fourth and two, the backup quarterback found Sorenson again to move the chains.

Mayer showed his mobility with a 13-yard run to put the RedHawks at the 5-yard line before connecting with redshirt freshman tight end Jack Coldiron for the touchdown.

On the next Cardinals possession, Plitt perfectly executed a pooch punt to put Miami on its own 2.

It didn’t faze the RedHawks.

Sorenson drew a pass interference flag to give the offense some breathing room. The veteran receiver was a key factor on the drive, with two big catches to put the ’Hawks within striking distance of the end zone.

Mayer capped off the drive with a strike over the middle to Coldiron for the tight end’s second touchdown of the game.

Mayer’s chemistry with Coldiron isn’t a coincidence. The two were teammates at Covington Catholic High School in Northern Kentucky and even won a state championship during Mayer’s senior year.

“It means a lot to the community, I’m sure, and it was really awesome to see it,” Mayer said. “Especially, you know, it’s been three years since I’ve thrown him a touchdown, probably since senior year of high school.”

After a three and out, the Cardinals punted the ball back to Miami to start the fourth quarter. Starting at midfield, Mayer found sophomore receiver James Burns on a 16-yard pass.

On third and goal, Mayer tossed a back-shoulder fade to redshirt junior receiver Jalen Walker in the end zone to give the quarterback his third touchdown pass of the game.

Mayer finished with 212 yards on 16-of-24 passing and three touchdowns.

Martin cited Mayer’s hard work in the offseason as the reason for his performance.

“AJ Mayer prepared these last eight months — everything he could do — and then he gets his shot and he plays his stinkin’ tail off,” Martin said.

Ball State wasn’t done yet, though. After getting the ball back, the Cardinals capped a seven-play, 59-yard drive with another Huntley touchdown. The senior running back finished with 131 yards and two rushing touchdowns.

Miami’s offense stalled the next drive and punted, giving the ball back to Ball State with four minutes left in the game.

Trailing by three, Plitt found Hall for another big play, completing a 31-yard pass to put the Cardinals on Miami’s 32-yard line.

Ball State tied the game a few plays later with a 47-yard field goal that just barely squeaked through the uprights.

The RedHawks went three and out on its next drive, giving the ball back to the Cardinals with just 42 seconds left in the game. Overtime seemed all but inevitable.

The redshirt senior linebacker tipped Plitt’s first-down pass and secured the ball, returning the interception all the way to the six-yard line.

It was McWood’s first interception of his career, and it couldn’t have come at a more crucial time.

McWood finished with a team-leading 14 tackles.

“I wouldn’t trade him for any Mike backer,” Martin said. “Now, I know there’s bigger, stronger, faster ones out there, but I wouldn’t trade Ryan McWood for any of them.”

Now, with a nail-biting win to start the 2020 season, he can rest easy. 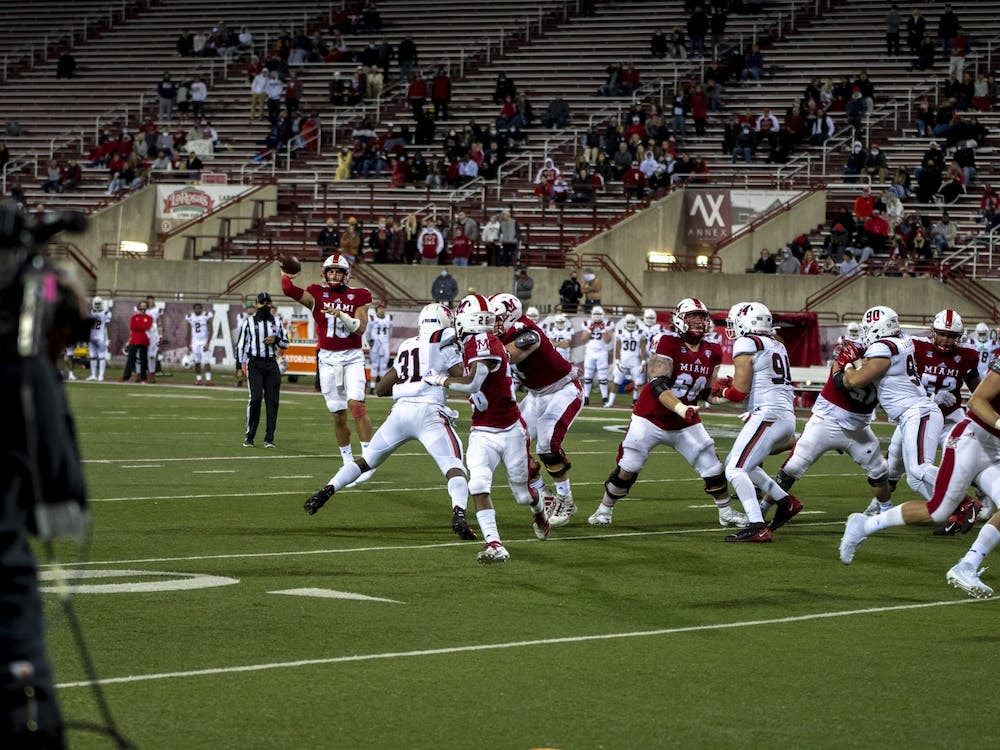 Miami has the talent and experience for another trip to Detroit

MACtion is back, as Miami looks to defend its conference championship. Chuck Martin's goal? "Win every MAC game. Like, that is the goal."