The six members of the judging panel took their seats in the front row marked with “Reserved” signs.

The audience rose and Caroline Grace Williams, Miss Ohio 2019 and emcee for the night, sang the National Anthem in a light orange gown and her Miss Ohio sash, with a crown pinned to her head.

“Confident” by Demi Lovato blared over the speakers, and the 11 contestants walked out on stage in rows and performed a short choreographed dance, wearing cocktail dresses, jumpsuits and wide smiles.

The contestants passed around a microphone and took turns introducing themselves with their name, major and school.

“The dreams of becoming Miss America start right here at the local level,” Caroline said behind the podium on stage.

Miss Oxford Tallawanda is one of 12 local Ohio pageants in the Miss America Organization. Local title winners qualify to compete at the state level, and state winners go on to compete nationally.

The Outstanding Teen competition is Miss America’s sister organization. Titles are open to high school students ages 13 to 17, and the competition is structured differently than the Miss competition.

The Miss Tallawanda title is open to women ages 18 to 25 who live, work or attend college full-time in Ohio. The Miss Oxford title is typically not open to residents and students in Butler County, but because there were only two contestants from Miami University, both crowns became open to anyone.

After three years of competing in Miss Northwestern Ohio and losing each time, she finally won the title last year and went on to compete in the Miss Ohio state competition. This year, she has participated in almost every local Ohio pageant, hoping to compete in Miss Ohio again.

For Olivia Kentner, a sophomore at University of Cincinnati, Miss Oxford Tallawanda is the first pageant she’s ever competed in. She’s performed in some capacity for most of her life through choir and musicals and has always thought that the Miss America women are strong and empowering.

Last summer, she forced her mom to drive to Mansfield to watch the final night of the Miss Ohio competition. At the end of the night, her mom turned to her and said, “Olivia, I think you can do this.”

“I think I can,” Olivia agreed.

The first portion of the competition is the on-stage question, where each contestant has 25 seconds to answer one question from a judge. The questions are based on current events and social issues, and the contestants don’t know what they’ll be asked beforehand.

It’s designed for contestants to show that they can speak clearly and thoughtfully about topical issues and then form their own opinions.

One by one, contestants walk out to center stage in front of a microphone stand, smiling and making eye contact with the judge who would ask her a question.

“How can we excite young voters about the upcoming election?”

“What can we do to reduce Ohio’s infant mortality rate?”

“What are some solutions for the school-to-prison pipeline?”

Next year, the Miss America Organization will celebrate its 100th anniversary. The competition has evolved over the past century, but some of the most major changes have happened in the past few years.

The Miss America 2014 competition began with pre-filmed video footage of the contestants doing a choreographed dance at different landmarks in Atlantic City and introducing themselves by saying their name and something quippy about their state.

“I’m from the Lone Star State, but I hope to be the shining star in your eyes tonight,” Miss Texas said, for example.

They then announced the 15 semi finalists who would go on to compete in the swimsuit portion of the competition.

Five years later, all 51 candidates for Miss America 2019 introduce themselves live on stage. They say what they have their degree in, what they are studying if they’re still in school, or their profession. Miss Michigan says that she’s from the state with the most fresh water in the country, but not for its residents to drink.

The 2019 Miss America Competition marked the beginning of “Miss America 2.0.” Most notably, the organization eliminated the swimsuit portion of the competition and said that it will no longer judge contestants based on appearance.

Replacing the swimsuit portion is an interactive session with the judges, where each contestant will speak about her achievements and life goals and how she will carry out the job of Miss America.

“I think making that change is redefining how we look at women in general,” Caroline said. “If you go back to 1921, and you look at what women were doing in 1921, to be in a swimsuit then in public was very liberating … Flash forward 100 years now, it’s very liberating for a woman to say, ‘You’re not going to judge me on how I look or what I’m wearing, but instead on my intellect and what I’m doing.’”

At first, Emily didn’t like the change — the swimsuit portion was her favorite. She liked putting on a swimsuit and strutting on stage to upbeat music while people cheered. But she’s grown to understand it.

“I understand why they got rid of it, because it hindered a lot of people who were not confident in their bodies,” Emily said. “A lot more women are trying [competitions] out now because that was such a hindrance before.”

Olivia doesn’t think she would have entered the competition if the swimsuit portion was still a part of it.

However, this shift away from emphasizing physical appearance hasn’t quite reached the Outstanding Teen competition, which includes a Lifestyle and Fitness portion. Contestants are judged on their overall first impression, physique, commitment to a healthy lifestyle and confidence.

The two 15-year-old Miss Oxford and Miss Tallawanda Outstanding Teen contestants jogged onto the stage wearing black shorts and white t-shirts. “High Hopes” by Panic! At the Disco played over the speakers as both girls did a choreographed dance consisting of different exercise moves, like jogging in place, jumping jacks and push-ups, all while smiling at the judges.

The talent portion of the competition counts the most toward the overall score. Contestants have 90 seconds to perform their talent, which can be anything as long as it doesn't involve fire, explosives or stripping.

Two girls performed tap routines, two danced, two performed monologues, one did a baton twirling routine, one played the piano and Emily and Olivia were two of the three girls who sang.

Emily performed a song from the musical “Newsies,” which she learned two days prior, and Olivia sang “Light in the Piazza,” which she had been working on in her voice lessons.

There were about 50 people in the audience, mostly contestant parents and friends. Also in attendance were three other local Ohio title holders — Miss Portsmouth, Miss Maple City Teen and Miss Northern Ohio — who came to the show wearing their sashes and crowns to support the contestants.

Jacky has worked for Miss Oxford Tallawanda since the first competition in 2006. Her position is volunteer-based, so she doesn’t get paid, but she doesn’t even think about how many hours she works because she loves it so much.

Emily already knew two of the other girls competing in Miss Oxford Tallawanda. She’s in a group chat with other girls who have competed in Ohio pageants.

“These girls have become my best friends,” Emily said. “It’s like a weird sorority.”

Olivia bonded with the two other girls who also had never competed in a pageant before. Before the show, Caroline gave a crown pin to the girls she hadn’t met or who hadn’t competed before.

The final portion of the Miss competition is evening gown and social impact statement, which is an initiative that the contestant will do work for to make a difference.

Contestants came out on stage one-by-one in floor-length gowns, and slowly walked around the stage, stopping in the middle to pose and smile. Then they stood in front of the microphone and had 25 seconds to present their social impact statement.

The contestants’ initiatives were about everything from support for veterans to promoting community service to fighting hunger.

Emily’s initiative, Teaching Gratitude, focuses on giving back to teachers.

Olivia’s Ready, Set, Graduate is a program designed to help high school students prepare for life after high school by choosing a path that they’re passionate about.

After each contestant presented, they all lined up in a row on stage, still in their evening gowns, for the final part of the night: crowning.

Miss Tallawanda 2019, Riley Post, came out wearing her sash and crown and handed each contestant a small bouquet of roses wrapped in pink tissue paper.

“Isn’t She Lovely” by Stevie Wonder played in the background while Caroline announced the winners.

There were only two teens competing for the two teen titles, so both girls were crowned.

Emily won first runner-up, which got her another bouquet of flowers, but not a chance to compete at the state level.

Breeonna Springer, a dancer for the Cleveland Cavaliers, was crowned Miss Tallawanda. She also won the On-Stage Interview and Talent awards, which both have a $100 scholarship prize. She said thank you to the judges after being handed a bouquet of flowers for each award.

Miss Oxford was the last title to be announced. Olivia almost couldn’t believe it when Caroline called her name. Her face stretched into a wide grin as she walked to the front of the stage. She bent her knees as Miss Tallawanda 2019 pinned a crown to her head and draped a sash across her shoulder. The spotlights made it look as though Olivia’s gown was sparkling.

The girls took turns hugging one another, then posed for all of the family members eager to take photos. 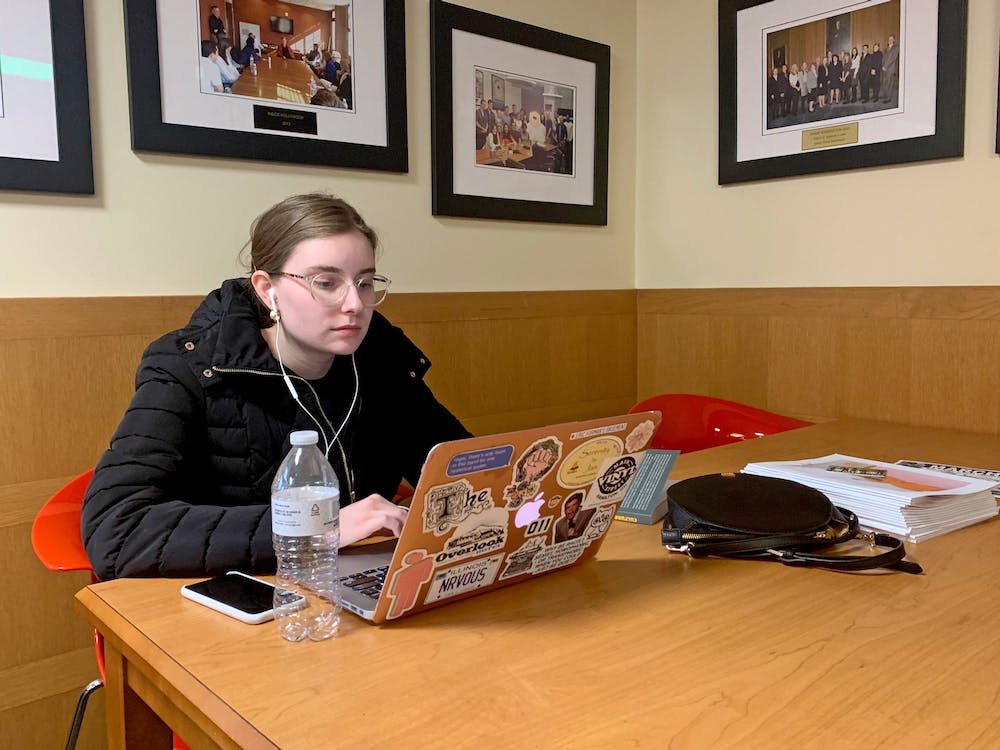