A year later, we’ve all failed

Last week, ten of the 18 former members of Delta Tau Delta (Delts) fraternity charged with hazing received their sentences after pleading guilty. Tyler Perino, a former Miami University student who was hospitalized last spring after he was hazed at a Delts Big/Little reveal, addressed the court before the sentences were read.

“I am a voice for kids that did not survive [hazing] similar to what happened to me,” Tyler said.

Tyler then watched as the court suspended the sentences of ten men responsible for his violent assault. Nine of them won’t face jail time and the one Delt who could serve 30 days in jail has a court date next week to review his sentence. He likely won’t face jail time, either.

Seven of them will only pay $100 — only $25 more than they would pay for a parking ticket on Miami’s campus.

Our legal system failed to hold these former Delts accountable for physically assaulting a man they called a brother. But what’s worse is that Miami’s administration, specifically University President Greg Crawford, has failed to take the opportunity to implement a system of restorative justice that encourages cultural change within and around fraternities on campus.

There are so many different ways the university could have used what happened to Tyler to incite a meaningful shift in how people relate to Greek life on Miami’s campus.

Our staff couldn’t agree as to what kind of legal outcome we would have preferred. Some members of our staff believed the former Delts should have served jail time or paid higher fines. Others argued that both were forms of retributive justice that would not impact the remorse of the former Delts or truly restore justice in this unjust situation.

The American justice system is flawed, and we understand we aren’t going to fix it (or address all of it) in one editorial.

However, visiting Judge Thomas Hanna could have handed down court-ordered community service, obligating the former Delts to volunteer with an anti-hazing organization or another group that would force them to reckon with the consequences of their actions.

The university administration could have (and could still) require fraternities to have formal recruitment on campus like sororities and have them hold Big/Little reveals and initiation on campus to monitor these processes and reduce the risk of hazing. They could address what happened to Tyler with first-year students before they go through spring recruitment, educating them on how it happened and why it won’t happen again.

Crawford could’ve been more visible — on social media and in person — throughout the past year, from the day the Delts were suspended up until the fraternity’s former members received their sentences.

He could’ve held a press conference after the sentencing hearing, condemned the former members’ actions, expressed his support for Tyler and explained what the university is continuously doing in response to both help him and to make sure nothing like it happens again on Miami’s campus.

Hell, Crawford could have attended the sentencing as a symbol of solidarity. Or, at the very least, someone from the university administration or student life could have.

But none of that happened.

The administration did kick the fraternity off campus for the next 15 years (they have the opportunity to recolonize in 2034), but the toxic masculine culture ingrained in fraternities at Miami certainly hasn’t changed a year later.

Just last Friday, Miami’s chapter of Alpha Sigma Phi was placed under a ‘cease and desist’ by the Interfraternity Council (IFC).

Students on this campus have seen what happens when hazing is at its absolute worst, and they’re still doing it. Students know how dangerous and destructive this all is, and still follow a code of silence because they’re either too cowardly to stand up for what’s right or they’re complicit in the perpetuation of violence against their peers.

There is a pervasive attitude within fraternities that hazing incidents will eventually blow over. That’s because they usually do, and the university allows it to happen.

Former Delts still walk around this campus sporting hoodies with their letters proudly emblazoned across their chests. Only two out of the ten Delts who were sentenced last week addressed the court and admitted they were responsible for physically and emotionally scarring Tyler. Seven of the 18 Delts that were charged are still students at Miami.

Meanwhile, Tyler no longer attends Miami. He was abandoned by his peers and by this institution. We all failed him.

Miami values preserving its image over implementing cultural change. We welcome any attempt to prove us wrong, but our editorial board posits that as the university refuses to stand up and condemn the Delts and publicly commend Tyler’s bravery, they are complicit in hiding this instance of hazing under a veneer of “From Now On” imagery. An email sent to the student body listserv doesn’t cut it.

When the survivor of a hazing incident is ostracized and feels compelled to drop out of Miami while his perpetrators continue walking down Slant Walk to class, it shows the student body that the status quo remains in tact.

Tyler, we want you to know your decision to come back for the sentencing and address the former brothers who hazed you takes incredible bravery.

You are the true embodiment of Love and Honor, and Miami should be proud to call you its former student.

We all have a duty to do the same.

We need to Love and Honor one another, hold each other accountable and stop the culture of hazing on Miami’s campus. 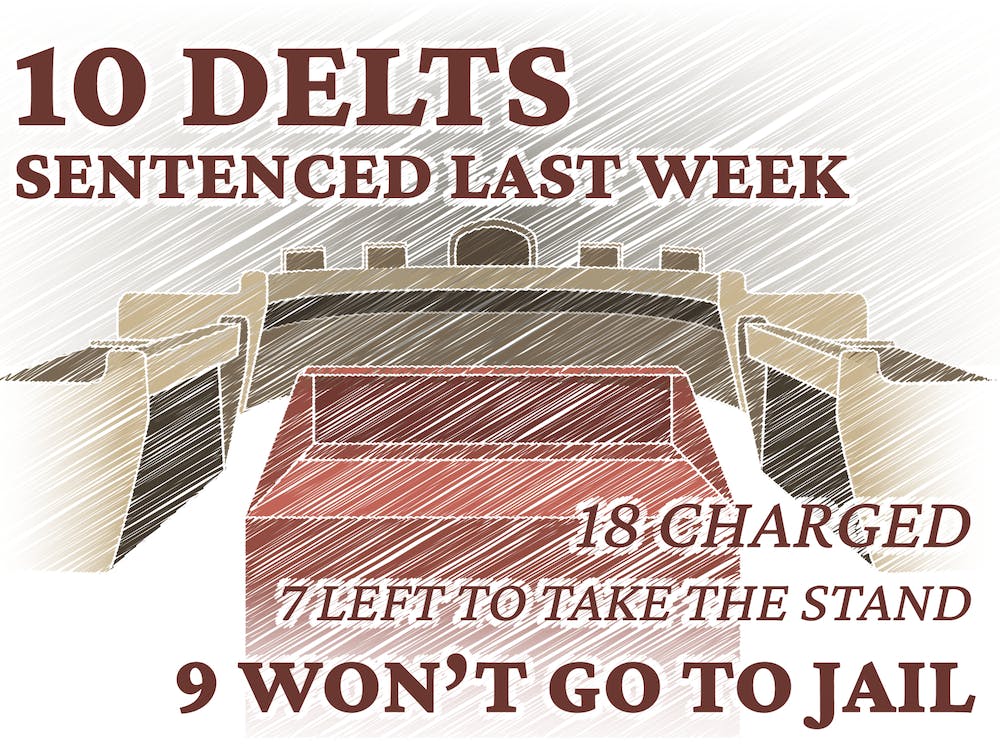 Tyler Perino stood between his parents, Randy and Laura, while facing the judge in the Oxford Courthouse. A few rows behind him sat several former members of the Delta Tau Delta (Delts) fraternity, and just a few feet to his right stood another: Joshua Plaster, who had just pled guilty to hazing him.  Nine of the 18 former Delts charged in October pled guilty to hazing and received their sentences in court on Tuesday, Feb. 25, which mostly consist of fines.

After a deadline extension, three tickets are now in the race for Student Body President (SBP) and Vice President (VP). Elections will be held March 17-18 on the Hub.

Our staff is disheartened by the apparent disinterest in leadership positions within the student body. It’s a reflection of the increase in both the political apathy demonstrated by the majority of the student body and Miami’s failure to emphasize civic responsibility in either academics or student life on campus.