The predicted rout would’ve been on.

The predicted rout over a winless Akron team never came, and the first score took way longer than expected.

But the RedHawks did win, 20-17, Wednesday at Yager Stadium, giving them seven victories (7-4, 6-1 Mid-American) and keeping themselves undefeated at home this season.

This year is the first in which Miami hasn’t lost at home since 2004. It also marks the first time head coach Chuck Martin has claimed more than six wins in a season since he arrived in Oxford.

He breathed a sigh of relief as he entered the postgame press conference.

“You’re a 30-point favorite at home, and you win by three,” Martin said. “It doesn’t feel good — I don’t care what anyone says. But credit to Akron. We’re never going to take credit away from the other team. They made plays to stay in the game.”

Everything pointed to a blowout.

Miami dominated most aspects of the first half. The RedHawks led in total yards, first downs, third-down conversions, time of possession — most of the categories on the stat sheet. They led, 17-3, on the scoreboard at intermission.

Yet, Akron, who has not won a game in more than a calendar year, staged a comeback. The game was very much up for grabs late in the fourth quarter.

“They probably caught us by surprise,” junior running back Jaylon Bester said. “I feel like we underestimated them a little bit, just because they haven’t won a game, and we’re going to the MAC Championship and a bowl game. They hit us in the mouth a couple times, and that started fueling us to get something going.”

As the clock ticked beneath four minutes left in the fourth quarter, UA redshirt junior quarterback Kato Nelson threw for a first down on third-and-13 and pushed the Zips into Miami territory. A touchdown would’ve put Akron up by four.

As the clock ticked beneath three minutes, Nelson was sacked twice in three plays by freshman linebacker Ivan Pace Jr, which forced a punt. Pace finished with a six sacks to set a new Miami record.

“Ivan Pace stepped up,” said redshirt sophomore safety Sterling Weatherford, who had 10 tackles to lead the team. “He had a heck of a game.”

The RedHawks tallied a program-best 14 sacks two years after Martin said his players “looked like Rocky Balboa chasing the chicken” against Nelson.

Miami took over with 1:40 remaining and gained the first down it needed to clinch the 20-17 victory.

Bester had a career day against the Zips, rushing for a personal-best 128 yards and two touchdowns. Aside from two field goals by senior kicker Sam Sloman, Bester was the offense.

Nelson passed for a touchdown, and Akron kicked a field goal. Its other touchdown came on a pick-six of MU freshman quarterback Brett Gabbert.

Gabbert was kicked around by the Zips’ defense. He completed 10 of his 21 passes for 117 yards, two interceptions and no touchdowns.

To end their regular season, the RedHawks head to Muncie, Indiana, for a Black Friday matchup against the Ball State Cardinals. The contest is scheduled for noon and will air on CBS Sports.

No matter the result, Miami is still headed to Detroit for the conference championship game and a to-be-determined destination for a bowl game. 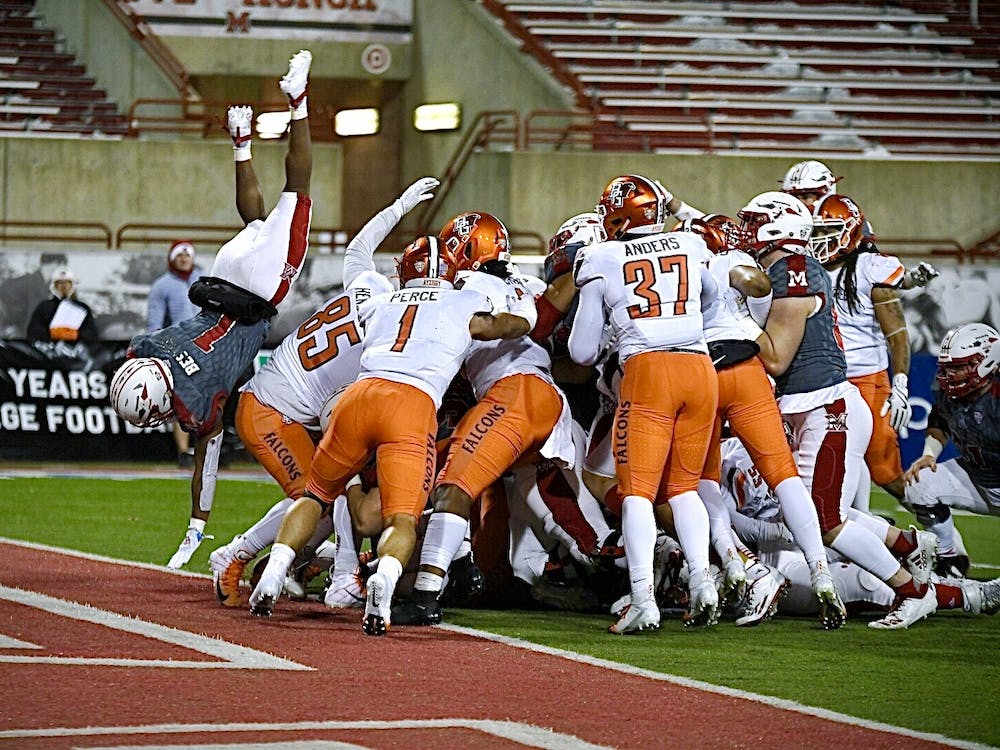 Miami does its part, now waits for Buffalo result

Without much drama, Miami claimed a 44-3 victory. It has won four straight.