Ari Chinoporos has to eat a birthday cake pop from Starbucks and listen to “Fight Song” by Rachel Platten three times.

Because that’s how she prepares for an equestrian show.

“It’s my good luck charm,” Chinoporos said. “I live by it, and I swear it works.”

She specializes in hunter-jumper, which focuses on elegance, accuracy and flatting, which is when a team of riders and their horses go through three out of the four horse gaits while following a particular pattern.

When Miami funds or holds a show for the Intercollegiate Horse Show Association (IHSA), Chinoporos doesn’t ride her own horse; instead, she rides one provided by the university.

But she does get to work with one horse during shows with the World Equestrian Center (WEC), a private facility not affiliated with the university.

Chinoporos has been riding Pizarro, or “Papa P” as she calls him, since the end of her freshman year, when she was determined to get the stubborn horse to canter.

“I knew that I liked him,” Chinoporos said. “I didn’t know why because he wouldn’t do anything I said. And then I was like, ‘That’s it, I’m coming back next year!’”

A specific trick Chinoporos is proud of accomplishing with Pizarro is the counter canter: When the lead is opposite of the direction the horse is traveling around the ring.

Riding lessons at Miami are an hour long and twice a week. Chinoporos arrives 30 minutes before her lesson to clean and groom her horse, and then stays about 30 minutes after doing the same thing.

When the team has a show coming up, riders have an option to sign up for extra lessons. Chinoporos always takes advantage of the opportunity.

“I have to get all of my homework done for the week, otherwise I’m not going to ride,” Chinoporos said. “I try to clear my schedule and my work load as much as possible, so I can really dedicate my week to preparing.”

Chinoporos has a couple of rituals she stays true to when there’s an upcoming show.

On the morning of the show, she eats her cake pop and jams to “Fight Song.” If she accidentally plays it more than three times, she has to listen to it 13 times.

In high school, her coach made the team listen to the song the morning of the first day of each show. One of her teammates mentioned that they had to listen to it three times for good luck. She still carries on the tradition.

Chinoporos and her teammates arrive at the IHSA show and she starts to warm up her horse for the day.

“Less is more,” Chinoporos said. “I try to do as little as possible. I like to ride around very relaxed to help [the horse] feel comfortable. I try to keep it as casual and as similar as to what we do at home, because horse showing is stressful for them, too.”

The team is usually at a show all weekend — Thursday through Saturday or Friday through Sunday, depending on the rider’s academic schedule.

During a WEC show, Chinoporos does jumping in the morning and flatting in the afternoon. In between events, she figures out where in the facility she’s going next, so she can get herself and her horse there on time.

“‘Hurry up and wait’ is the motto of horseback riding because you will sit around all day waiting for your class to go, and then all of the sudden you’re like, ‘Oh my God, get ready, it’s time!’” Chinoporos said. “Then you get to the ring and then they’re like, ‘OK, we have 10 people to see before you can go.’”

For jumping, judges score based on consistency, pace and how well the rider executes his or her individual plan, also known as the specific route the rider takes their horse through. For flatting, judges score on equitation, or the rider’s form and presentation.

Chinoporos said it’s hard to receive a good score for IHSA shows because the riders aren’t riding their own horses, though the judges recognize this.

“It’s really nice to go to shows with a horse that was donated to Miami and still do really well,” Chinoporos said. “You’ll be in the ring with people that have $150,000 horses, and you’re like, ‘Mine is free!’”

For IHSA shows, there’s a selected person in each class called the “point rider” who represents the team as a whole. Chinoporos knows when she or another rider has been selected to be the point rider, even though the coaches don’t reveal who it is to the team.

The point rider’s cumulative score is put into a final tally at the end of the show season, which then determines which teams qualify for the postseason.

If Chinoporos receives a bad score, she tries not to let it get to her, especially if it comes from an IHSA show.

“I try not to take it personally,” Chinoporos said. “I like to think about what I could’ve done better.”

She takes time to watch videos from the show. She pinpoints what she did wrong and focuses on what she can do to improve.

Chinoporos’ next show is during Miami’s family weekend, Oct. 18-20. She’ll eat her birthday cake pop and get her song queued up. 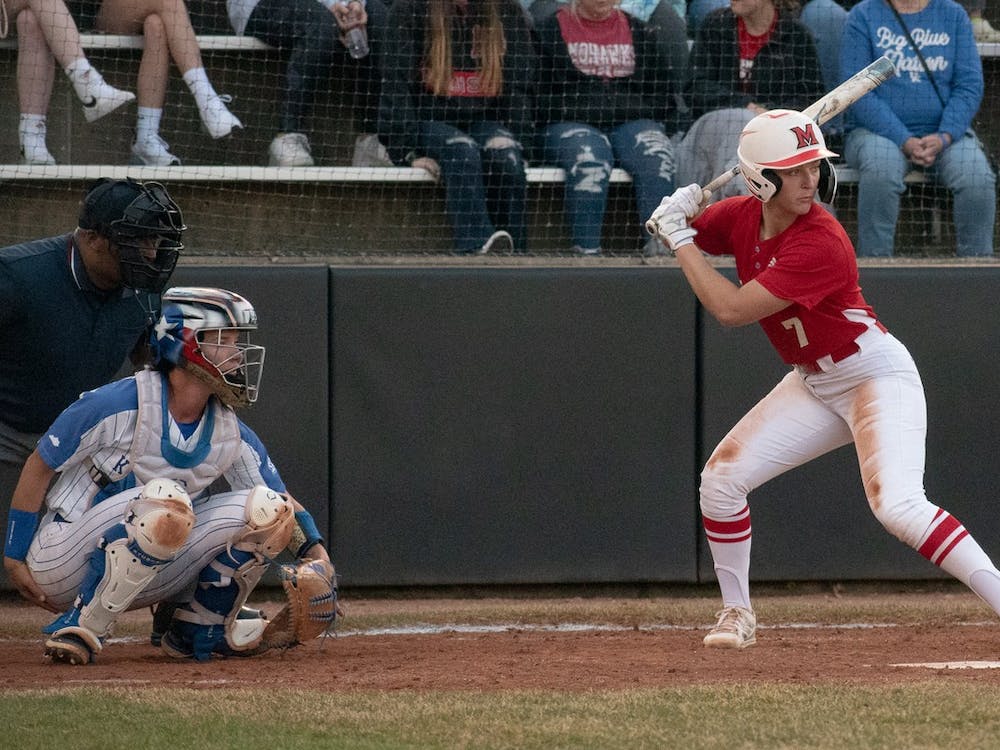 Miami softball pulls a win over the University of Kentucky

After a bit of a rocky start to the season, the Miami women’s softball team seems to be making a comeback.  On Wednesday night, the team pulled out a 7-5 victory over No. 8 Kentucky. The RedHawks were previously 6-10. 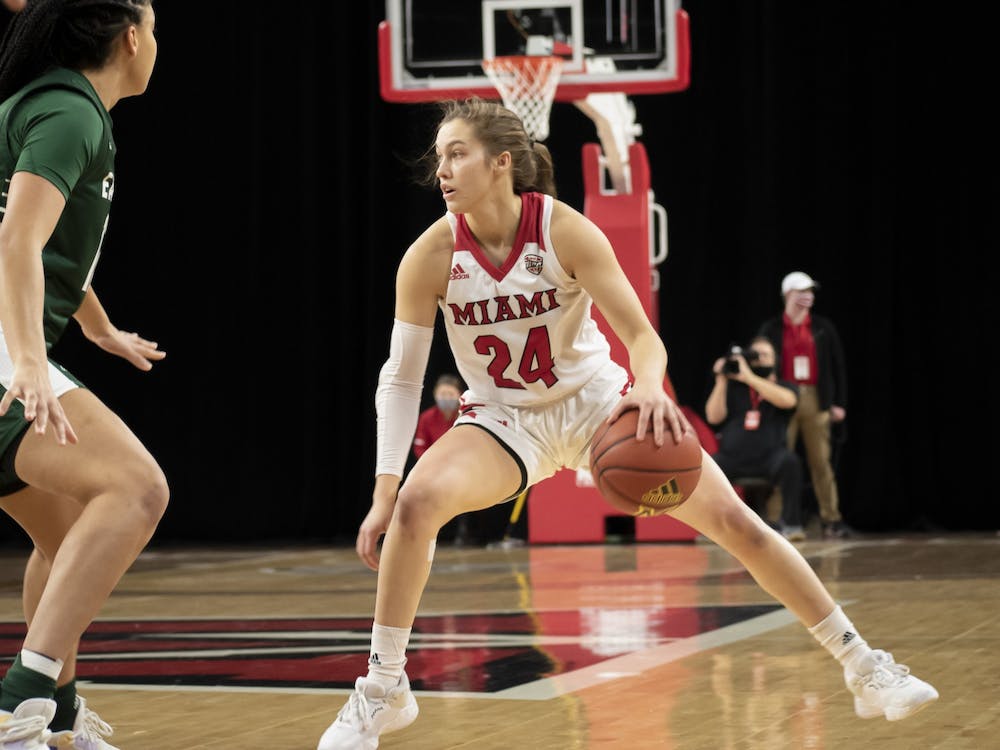