The great Miami bake off

"Ok, here's what I'm thinking," Emma said to Justin while they waited at the end of the line to get decorations.

The couple was spending their Tuesday night at The Great Miami Bake-Off, an event hosted by Miami Activities and Programming (MAP) on Nov. 27. Inspired by "The Great British Bake Off," a competitive cooking show, teams and individuals battled to see who could decorate the best cake.

Inspired by the death of SpongeBob creator Stephen Hillenburg that was announced earlier that day, Emma wanted to decorate their cake with the mocking SpongeBob meme.

"How are you gonna pull that off?" he asked.

"Why do you doubt my artistic ability?" Emma asked him.

Last semester, Emma and Justin didn't know each other, but she always saw him at Garden Commons when she went there for lunch. Near the end of the semester, Emma wrote her phone number down on a napkin, went up to his table, introduced herself and gave him the napkin.

They started dating at the beginning of this semester.

Slowly, the line inched forward and the pair got a better look at the spread of decorations -- bowls of assorted candy, sprinkles in every color, fruit and two big buckets of frosting.

Justin grabbed a bowl and the spoon sitting in a large bowl of M&Ms, and began picking out just the yellow ones and plopping them into his bowl. One woman working at the event started watching him, head tilted.

"She has a vision," he explained, nodding toward Emma.

Four rows of four tables lined the Armstrong Pavilion, each covered with a red and white checkered tablecloth. Emma and Justin chose a table on the far right of the room, the opposite side from the table with the decorations, but next to the prize table.

They returned to their table with three bowls -- one with yellow M&Ms and graham cracker crumbs; one with brown sprinkles, crushed up oreos and twizzlers; and one with mini marshmallows, four black jellybeans and a few more twizzlers -- and a cup of white frosting scooped from one of two big buckets.

A student from MAP called 'start' over a microphone, and a timer projected on both screens at the front of the room started counting down from 30 minutes.

Emma and Justin each grabbed a knife and began covering a round vanilla cake with white frosting.

After a few minutes, Emma put down her knife.

"I'm gonna put up my hair," she said sweeping her hair into the scrunchie around her wrist. "I can't be slowed down by this."

The two continued to frost the cake as music from "The Great British Baking Show" played in the background.

"This music is too slow for my elevated heart rate," Emma said to the dainty string and piano instrumentals.

With her knife, Emma traced the outline of mocking SpongeBob in the frosting, referencing a picture that Justin had pulled up on his phone that kept locking every few minutes. They took turns grabbing graham cracker crumbs between their fingers and carefully sprinkling them inside of the outline.

"Licorice pants or brown pants?" Emma asked Justin, considering both their bowl of brown sprinkles and their handful of Twizzlers.

"I wish I had tweezers," Justin said as he carefully placed small, white, sphere-shaped candies on SpongeBob's face to outline his eye.

"Why did we not come prepared?" Emma said.

After deciding that jelly beans made better eyes than blueberries, Justin held a plastic piping bag open for Emma as she scooped spoonfuls of black frosting inside. She bit the tip of the bag off with her teeth and began outlining SpongeBob with a thin line of frosting.

Justin took another trip to the decoration table and returned with a bowl of Swedish fish to put on the side of the cake while Emma finished outlining.

Around them, each of the 16 tables had a team standing around it, decorating a cake. One team seemed to have brought their own frosting tips to pipe the frosting in fancy designs. One team's hands had been stained green from food coloring.

With less than 10 minutes left, Justin got another bowl of frosting and squeezed a few drops of orange food coloring on top to pipe "Great Miami Bake Off" in alternating uppercase and lowercase letters.

"Do we have time for that?" Emma asked looking up at the timer ticking down from six minutes, then down at their cake that only had a small corner of space left. "Do we have space for that?"

Justin continued spooning the orange frosting into a plastic piping bag, twisting it shut and squeezing the frosting down and out the opening at the tip.

The meme wouldn't be complete without the words, after all.

As Justin carefully piped the letters onto the cake, Emma stood back and watched, munching on an extra Twizzler.

"Is that legible?" Justin asked, examining his work.

"I can read it," Emma reassured him.

When time was up, everyone put down their plastic utensils and bags of frosting and picked up their phones to snap pictures of their work, both for memories sake and to submit it for judging via MAP's Instagram account.

One team made a red and white cake complete with the Miami "M." Another team made the top of their cake look like a pizza, using coconut flakes for cheese and candies for toppings. Another had a blue cake with artfully placed fruit on one side. 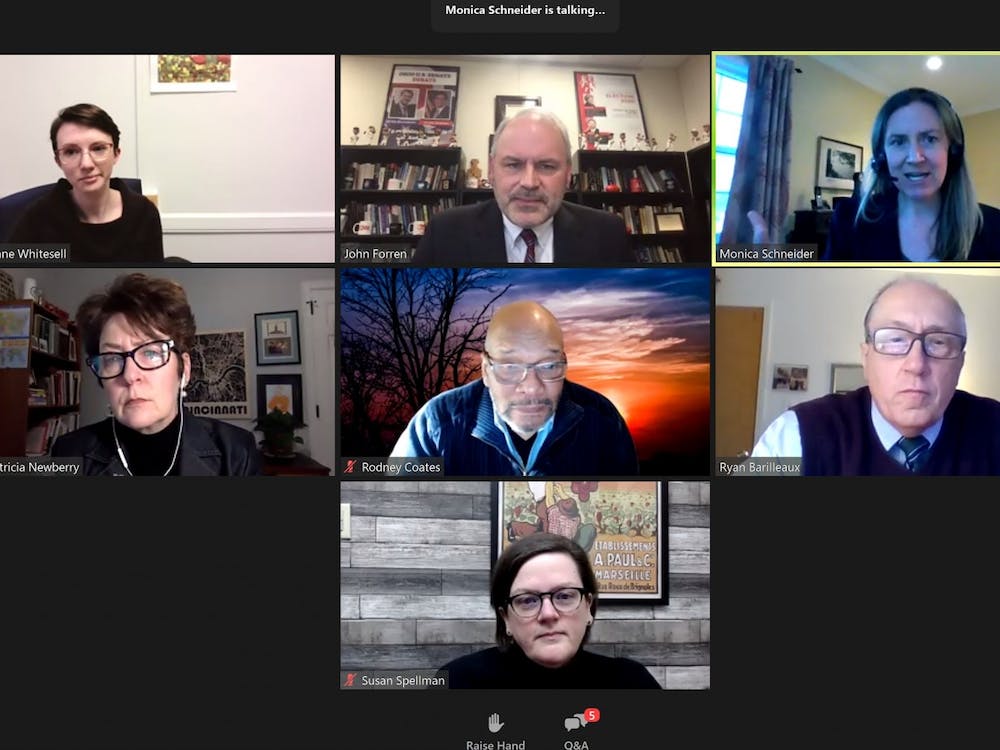