Day tripper: A guide to Indianapolis

At just shy of a two-hour drive from Oxford, Indiana's capital city is a great bet if you've been procrastinating on your Fall Break travel plans. If youstay longer than a day, there are plenty activities to fill your weekend, but if your time and money are limited, you can still make a day trip worth your while. Not including gas, this whole itinerary will cost you about $50.

No need to wake up at the crack of dawn for this trip. Make a coffee stop (see Roadtrip Recommendations), cue up a couple podcasts and set your GPS to the Indianapolis Museum of Art.

Between the Indianapolis Museum of Art's four floors and the adjacent "100 Acres" nature and sculpture park, you could easily spend the day here, but since we're pressed for time, make sure you hit a few highlights: Robert Indiana's famous "Love" sculpture, Impressionist works by Monet, Renoir and Picasso and James Turrell's perception-bending installation, "Acton."

Planning on coming back to the museum in the next year? Spring for the college student membership. At just $35, it's cheaper than paying regular admission ($18) twice, and gets you into the museum and select special exhibits and events for a full year.

A self-proclaimed "student union for adults," this Indianapolis-based chain serves up breakfast all day and a selection of soups, salads and sandwiches. The menu isn't revolutionary, but the food is fresh, healthy and locally sourced, and most meals cost less than $10.

The biggest appeal of Patachou, though, is that the owners also operate a foundation by the same name that works to solve local issues of hunger and food insecurity.

The canals that run through Indianapolis' downtown were dug in the early 1800s, but it wasn't until they were refurbished that the three-mile path became a destination.

Paddleboats and kayaks are available for rental, but walking or biking along the canal will make it easier to appreciate the murals, sculptures and memorials along the path.

Second only to Washington, D.C. in its number of war memorials, Indianapolis devotes more acreage than any other U.S. city to American veterans. The most impactful, though, may be the Shrine Room of the Indiana War Memorial.

Between the shocking verticality of the room, the sheen of low, royal blue lighting and the overwhelming size of the American flag that hangs from the ceiling, it's impossible not to linger, in silence, as you take in the space. Beyond the shrine room, the deceptively plain monument contains an entire museum, chronicling every war the U.S. has fought since the Revolutionary War. Admission to the museum, which is open 9 a.m. to 5 p.m. Wednesday through Sunday, is free.

One of America's strangest and most talented novelists, Kurt Vonnegut, was an Indianapolis native. The city takes pride in Vonnegut's former residence, even dubbing 2017 the "The Year of Vonnegut" after the renovation of the Kurt Vonnegut Memorial Library. True Vonnegut fans should make a trip to Indy specifically for the "Vonnegut Tour," but any visitor can at least make a stop at the Mass Ave. mural depicting the famous author.

The street is also packed with boutiques, restaurants, art galleries and the nation's oldest shoe store, Stout's Shoes, established in 1886.

Located in a 19th century Athenaeum building downtown, The Rathskeller is a bridge between the past and present in a city that's rapidly changing year to year. Arrive early to avoid the $5 cover charge that starts at 5 p.m., but linger for the outdoor biergarten atmosphere, live music and Bavarian bar food. Sample one of their many selections of German beer or take advantage of one of their cheaper domestic draft options (if you're staying in town or have a designated driver back to Oxford, of course).

Don't go far after leaving your biergarten picnic table. Located in what used to be the coat check room of the Athenaeum is Coat Check Coffee, easily the most overtly hip coffee spot in the city. It's open until 7 p.m., so linger there and enjoy a one-and-one (a double shot of espresso split between a macchiato and a shot served straight up) until the espresso machine has quieted, and it's time to make the drive back to Oxford -- or to decide you need to spend another day in the city.

Behind the Brick - Curating the art of Miami University

In this episode your host, Babs Dwyer, speaks with Miami University Art Curator, Jason Shaiman, about all sorts of topics from what his work day to day looks like to how you can get more involved with The Miami Art Museum. 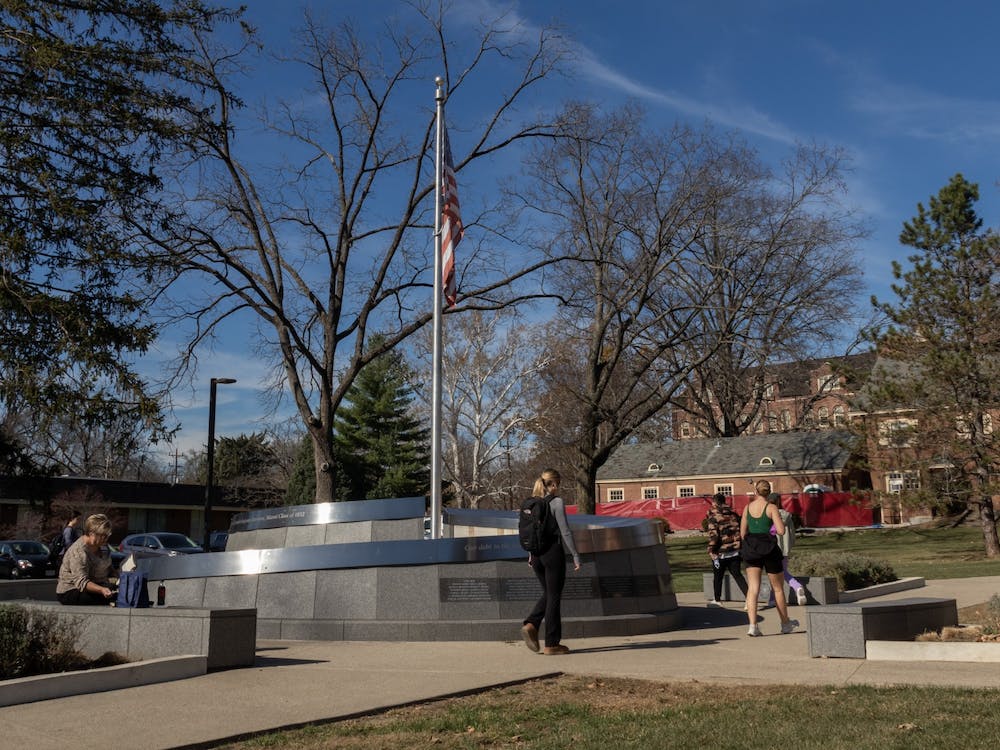 The Collegiate Purple Star Award is given to schools that are considered military-friendly and has many variations across the United States. However, this Ohio-specific designation is different from other programs because it is a free application process. One of the groups who initiated the program was the Ohio Veterans Educational Council, an organization of public and private institutions.