The unveiling of 3,000 murals in Cincinnati by Artworks took 30 years. Thirty-six of the 52 city neighborhoods host at least one mural.

A recent column from the Cincinnati Enquirer labeled Hamilton as possibly the next Over-the-Rhine, because of a resurgence of "cultural play" and the placement of new statues outside the Fitton Center for Creative Arts.

Members of the arts community in Oxford hope to see their town next in line.

The Oxford Farmer's Market is one step in the right direction, said Larry Slocum, the market's manager since 2006.

"As more people want to see more of an arts scene, it will happen. That is the way life goes," Slocum said. "So I look forward to that."

Local residents and market vendors Masha Stepanova and Joe Prescher of Stella's Yen agree that the public arts scene in Oxford may just be in its early stages.

Stepanova and Prescher met at the University of Iowa, then each eventually reconvened in Oxford, where Stepanova is a librarian at King Library, specializing in Slavic languages. Since 2013, they have been selling and commissioning distinctive crafts like hand-bound books, bags, wood burnings, stone carvings, walking sticks and jewelry.

Their most recent project was the completion of their naturally-lit, wood-filled home studio. Additionally, their outdoor storage space holds larger installations in progress, like "Stella," a ballerina sculpture and the namesake of their Oxford Farmer's Market booth. They have a setup that satisfies them.

Artists by trade, they find great pleasure in making art for others. They admitted the market is a simple way for newcomers to join the arts scene, rather than search hard for an exclusive society.

They keep an optimistic outlook on the status of public arts.

"It'd be great to get more public art going," Prescher said. "It's a great time for Oxford right now to get things moving and this market is something we can anchor in."

The pair has mused on the idea of filling more spaces with art on High Street.

"It'd be great to have artists coming out, contributing to the culture uptown," Prescher said.

Faced with some zoning and funding limitations, there is actually a greater obstacle at play. They believe that the push must come from the ground up.

The Historic and Architectural Preservation Commission has encouraged a greater art presence and sees opportunities for art projects around town, Prescher said.

Currently, the Oxford Community Arts Center drives almost all community art engagement outside of the university. It keeps its calendar busy with classes like architectural photography, watercoloring, life drawing, African dance and

Other market vendors believe in the power of art engagement, as well.

Maegan Burkart, creator of a fiber art collection called Little Patch Alpacas since 2010, uses her own farm's alpacas, sheep, and llamas to sheer, spin, and dye unique blends and textures.

She gives her time to the SPROUTS, an Oxford Farmer's Market kids program that uses scavenger hunts to teach children what happens to food before it comes to the grocery store.

"When you see the kids realizing these things, it's awesome. It might grow. Last year was my first year and we had a lot of fun," Burkart said.

Slocum, who used to help elementary school teachers use music to teach math, science, and English, described the SPROUTS program as an "interactive adventure" with a turnout of 40 to 60 kids every Saturday morning.

"I'd do it again," Birch said of her years teaching art. And that she has. She has a large role in the after school programs at OCAC that offer experiences kids wouldn't necessarily get in a regular classroom.

Under her market tent, she sells modified versions of the earth, each with a story.

Her selection of low-maintenance, native plants keeps college plant-lovers in mind. She collects and constructs wind mobile materials from places like Lake Erie or her neighbor's bamboo backyard. She reclaims fabrics, hunted down at Goodwill, to hand sew into bags.

The future of Oxford's public arts may be hard to define, but it is on the minds of many market-goers.

Prescher and Slocum shared that, one day, they would like to construct an entryway arch to the space, as a public declaration of the market.

To be a part of the dialogue, all are welcome at the farmer's market, which prides itself in "cultivating community." Slocum estimated that there are 200 student visitors at the market among the 900 total visitors each week.

The market sits just behind Uptown's Memorial Park on Saturdays from 8 a.m. to noon during the summer season. All first-time guests receive "GREENback" coupons to use toward purchases.

Smoothing over problems: The men behind the maintenance at Goggin

“I had never even heard of a Zamboni,” Daryl Hildebrand said. 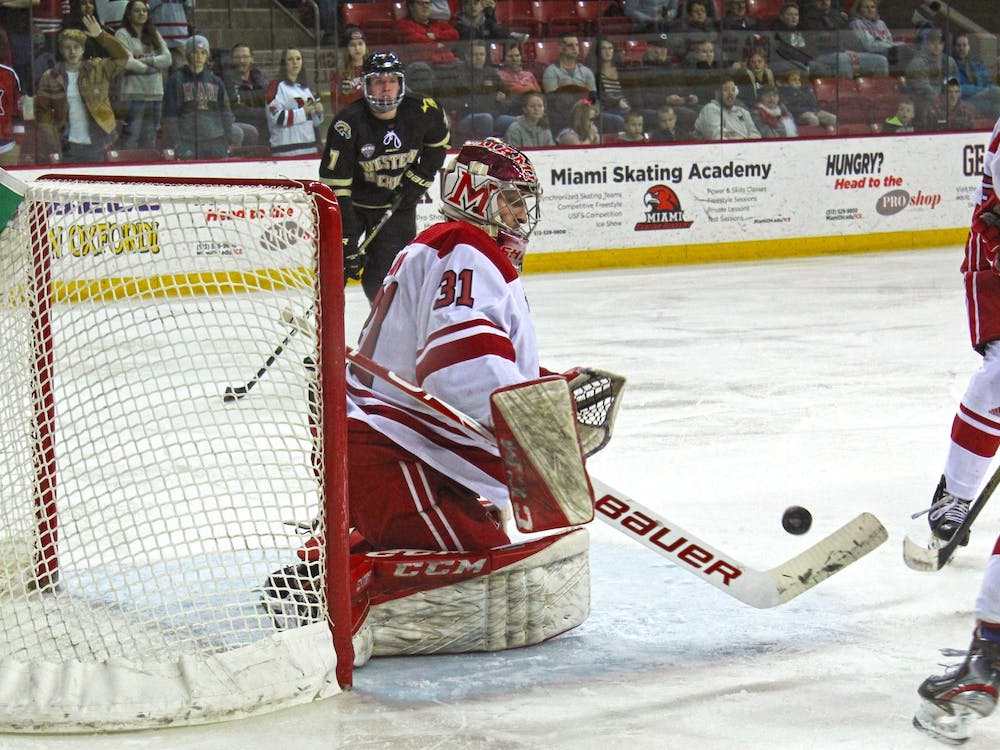 “But I do think throwing your hands up in the air and saying I’m doing everything I can do and we’re still losing, that’s not what’s happening,” Chris Bergeron said.